Links – Pick yourself up a copy from Amazon.co.uk or Amazon.com | Why Pink Floyd release schedule info | 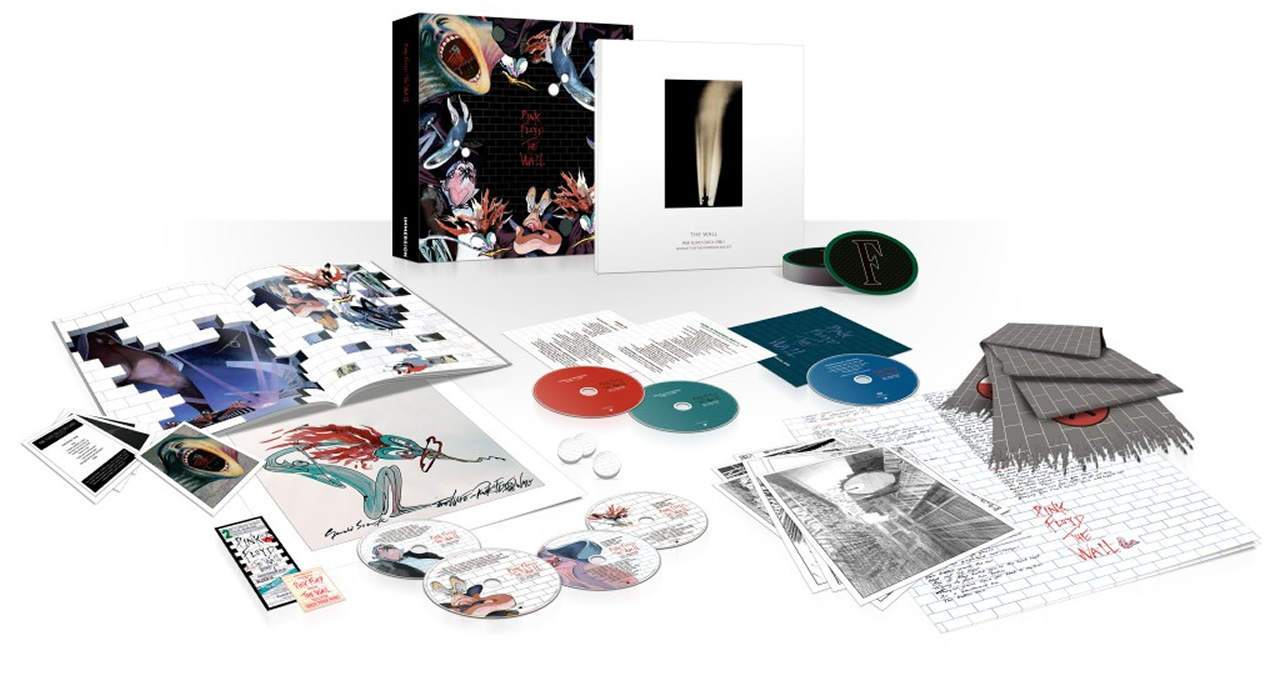 The Wall Immersion Boxset is released today (tomorrow in USA) in the third and final phase of the Why Pink Floyd release schedule. The Wall has already been released as the remastered double album Discovery edition back in September 2011. But we now have the Experience Edition which is the original double studio album plus a demos CD and the Immersion Boxset. There is also a vinyl version of The Wall album as well as digital editions.

The Wall Immersion Boxset contains lots of goodies for fans to enjoy from audio and video, to picture books, prints and more. CD1-2 contain the original Wall album remastered in 2011. CD3-4 contain Is There Anybody Out There which is The Wall performed live from the 1980s during the original Pink Floyd limited tour of The Wall.

CD5-6 are various suites of demos from the recording of The Wall from the original concept recordings by Roger Waters, studio demos and production demos by the band also done in the studio. Additionally, the Comfortably Numb and Run Like Hell demos that David Gilmour wrote the music for during the recording of his solo album shortly before work commenced on The Wall are also included. CD7 is then a DVD featuring the Behind The Wall documentary, clips from the original 1980s Pink Floyd Wall performances and some other items.

There has been some criticism of The Wall Immersion boxset by fans due to the fact that it does not contain a single piece of audio recorded in 5.1 or SACD format which is of great disappointment to many fans as the production of The Wall lends itself perfectly to the 5.1 recording format which, by its theatrical nature, would have benefited greatly from a 5.1 mix. Fans should not be disappointed though because a 5.1 mix of The Wall has been created by engineer James Guthrie but it was decided to be excluded from The Wall boxset because it would not have been finished in time to meet the deadline for the release of The Wall boxset so I believe. Or perhaps EMI decided they could maximise their profits from Pink Floyd fans by releasing it as a separate recording. Either way, I am sure when fans do get an opportunity to experience The Wall album in glorious surround sound in 5.1 it will all be worth it!

Criticisms on The Wall Demos 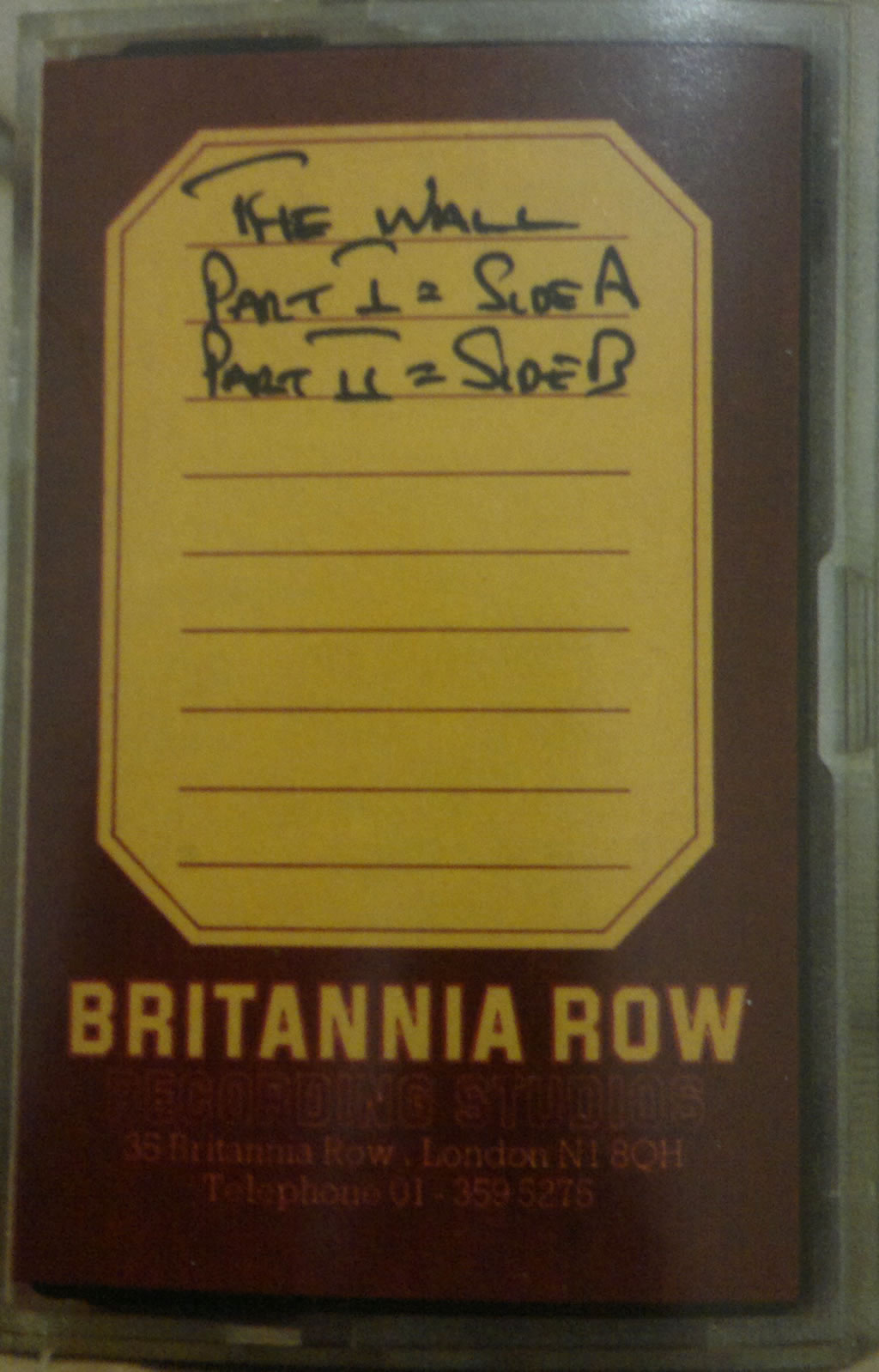 Having heard most of the audio courtesy of EMI letting me listen to it online over the past few weeks I can say that it sounds great and many times better than anything heard of the demos before now! The demos are of particular interest although these are not without debate. Roger Waters original demos were described by Nick Mason as “appalling demos” and that “He’d always overload his recorders, so the songs needed developing. But what an idea!”. This is perhaps the reason that it has been decided not to include all of the Roger Waters demos in a) their entirety as most are short clips of the original demos and b) some are not included at all as listed by RonToon who shared with the world The Wall Under Construction many years ago which are Roger’s original demo recordings.

That said, what we get to hear now are the band’s “Production Demos” that they recorded after Roger’s efforts! These band demos of The Wall sound very different in many cases and are featured in their entirety which lends weight to the opinion that clips were used of Roger’s originals to spare fans the pain of listening to parts of them! So in a way, thanks EMI… although the type of person who is likely to purchase the boxset is the type of person that wants warts and all so the “jury” is out to retire on that issue! Shit on him judge!

The Wall Boxset… Other Bricks….

In addition to the 7 discs and the pretty box itself, there are lots of other goodies included in the box too for your enjoyment which help east the pain of paying nearly £90 for it! As with Wish You Were Here and Dark Side of the Moon boxsets, there are the marbles, collectors cards, ticket, backstage passes, coasters and the credits book (bet Roger likes that lol). But there is also a nice scarf, a nice Storm Thorgerson Art Print, Exclusive photo book and a 44 page 27cm x 27cm booklet designed by Storm Thorgerson. These are some excellent goodies and compare favourably with the goodies from the other two immersion editions.

Yes. You should. You deserve it! You can go pick yourself up a copy from Amazon.co.uk or Amazon.com and give yourself a well deserved treat! There are lots of goodies in the box, great music, excellent live recordings, great demos giving you the chance to hear the album as the band only heard it before and listen to very different sounding versions of some Wall songs from the album.

There has been much talk of more Immersion Editions of other Pink Floyd albums by the fans. Animals in particular comes up and people have been making their own boxset compilations up based on material from lots of different albums and eras too! Perhaps EMI should consider bundling up lots of odds and sods if they cannot for some reason find enough material to do another Immersion edition of a single studio album. However, if they do not bring an Animals boxset out in the next few years, I hereby declare that I shall not be a Pink Floyd fan anymore! So there!

Now Tell Us What You Think!

Let us know your thoughts on The Wall Immersion Boxset and share your opinions on the demos and the goodies!

Alternatively, you may want to check out….