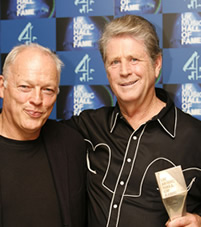 Amongst other things, David Gilmour will induct Brian Wilson into the UK Music Hall of Fame. Brian will also be performing live.

It’s that time of year again, folks. No, we don’t mean the Autumnal Equinox, or the third week back at school (when you actually have to start doing proper work, boo) – we mean it’s time once again for more music legends to be inducted into the UK Music Hall Of Fame! The ceremony known to its friends as ‘UKMHOF’ is in its third year now, and yet more illustrious names from pop’s history are lined up to take their place among fellow luminaries.

Swish, eh? The ceremony, held at London’s Alexandra Palace, will be screened on C4 on November 16 at 9pm. Among the celebrations will be Brian Wilson playing live, Joss Stone and Patti LaBelle performing two of Dusty Springfield’s greatest hits, and Wolfmother doing a tribute to Led Zeppelin! Sounds simply mah-vellous, doesn’t it?

And if you weren’t lucky enough to have been one of our ticket winners, check back here for exclusive footage of the inductees. In the meantime, why not have a look at our gallery of previous inductees. Brilliant!