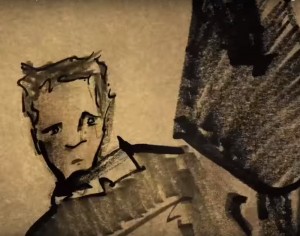 The very poignant video played on David Gilmour’s Rattle That Lock tour during In Any Tongue has now been released so you can watch it online.

The animation was created by a talented young American and is released just ahead of the David Gilmour Rattle That Lock tour continuing in the Americas starting on 24th March 2016 at Hollywood Bowl in California. Here is the video below, leave a comment with your thoughts.

Aubrey ‘Po’ Powell, David’s Creative Director, was looking for a talented animator to work on a video for The Girl In The Yellow Dress, and discovered in America a young film maker named Danny Madden, whose short film Confusion Through Sand had won recognition at the 2014 SXSW Film Festival.

Po was so taken with the work that he showed it to David and lyricist Polly Samson, who immediately employed Danny to make the Yellow Dress film. However, David and Polly had also written In Any Tongue about the futility of war, and by chance some of the illustrations in Danny’s film fitted the mood exactly.

Danny gave his permission to use an edited part of Confusion Through Sand to fit In Any Tongue, and the die was cast.

More: Visit David Gilmour’s website to find out more news about his upcoming tour in the Americas.

You may also enjoy the video to The Girl in the Yellow Dress.