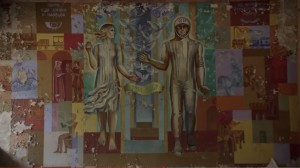 With the Division Bell soon to have it’s 20th Anniversary, and in addition to the new boxset and LP releases, there is a wonderful new music video for the song Marooned from The Division Bell album.

The video is set in Chernobyl after the famous nuclear power incident caused the entire area to be abandoned due to contamination. Eerie and spooky. You can watch that below.

Marooned is an instrumental piece and was written by David Gilmour and Rick Wright. Many of the songs on The Division Bell album had lyrics written by David’s wife, Polly Samson. Polly would go on to write many of the lyrics on David’s On An Island album too and she is also working on David Gilmour’s new album. Indeed, she was stuck on writing a lyric only recently as revealed on her Twitter account.

I am looking forward to hearing the two new albums from Roger Waters and David Gilmour which could get released this year. Stay tuned for more info on that! I would also expect that they would tour their new albums so there could be some concert announcements this year also which would be amazing.

It was spectacular to watch Roger Waters performing The Wall at Wembley Stadium last year but seeing some new music could be even better. The On An Island tour was also excellent and your humble narrator here saw it at the Bridgewater Hall in Manchester. Great show. Looking forward to some more live performances from Mr Gilmour which, if anything like the On An Island tour, should be most excellent indeed.