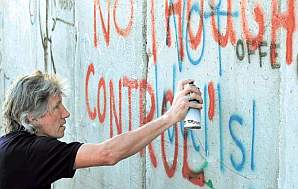 The two submitted a criminal accusation against Waters in which they claimed that the former Pink Floyd front man, had destroyed land and ruined IDF property when he spray-painted the separation fence adjacent to Bethlehem.

The day before Thursday’s sellout concert at Neveh Shalom Waters painted the words ‘No Thought Control’ on the fence.

“Maybe it will be harder to bring this one down,” said Waters comparing the West Bank security barrier to the Berlin wall in Germany, whose fall Waters vociferously campaigned for.

If the fence is not removed, “it will be hard for us to be human beings,” he added.

In 2004, the singer lent his name to a campaign against the building of the security fence launched by War on Want, an organization that “fights poverty in developing countries in partnership and solidarity with people affected by globalization.”

Any further developments in this story will be reported here! Lets hope poor Roger doesnt get banged up in an Jerusalem prison!