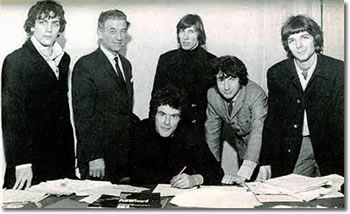 As previously reported, Pink Floyd are suing their record company EMI over a breach of their 1999 contract with the music titan. The breach, the band’s legal representative Robert Howe QC claims, is against one of the terms whereby EMI are not permitted to “unbundle” tracks from Pink Floyd’s albums and sell them separately.

Most fans would probably agree that Pink Floyd songs from a particular album should generally not be listened to separately as they form a single artistic recording in the form of an album. This is why the band put into their 1999 contract that such a practice of “unbundling” is not permitted. This contract was formed before the advent of iTunes and the like in a time when the sale of a physical album was the norm. As such, it could be interpreted – as EMI have done – that the contract meant that songs from a Pink Floyd album could not be augmented with other songs to form a new physical album. As music platforms like iTunes allow the sale of single tracks from a particular album, this could be considered a material breach of the contract.

"Pink Floyd [are] well-known for performing seamless pieces," said Robert Howe, the band's lawyer, at a High Court hearing yesterday. "Many of the songs blend into each other." To reflect this, Pink Floyd's renegotiated 1999 contract "expressly prohibits" EMI from selling songs out of context. And yet, Howe argues, EMI "[permit] individual tracks to be downloaded online and ... [therefore allow] albums not to be sold in their original configuration."

"[In 1999] both parties were faced with a whole new world of potential exploitation," Howe admitted. "It was unclear whether record companies would be selling direct to the consumer or through retailers." All the same, he said, "[it] makes no commercial sense ... [to say the contract] doesn't apply online".

Robert Howe QC, appearing for the group, said they wanted to ''know where they stand as a matter of contract''. The case concerns how online royalties are to be calculated.

A judgement on the case at the UK’s High Court is due to be made on Thursday 11th March 2010.

Pink Floyd signed to EMI in 1967 and have had a long and productive relationship with them for most of the history of their various contracts. EMI have released albums such as Dark Side of the Moon and Wish You Were here which form part of a back catalogue which is the second most valuable back catalogue after The Beatles.

Pink Floyd last released a studio album in 1994 in the form of David Gilmour’s The Division Bell. Since that point, the back catalogue has been “monetised” by releasing various anniversary re-mastered editions, DVDs and box sets such as Oh By The Way. It is likely that Pink Floyd will never release a new studio album again and will almost certainly never tour. Although Roger Waters and David Gilmour will probably continue to release solo material and tour. Indeed, Roger Waters, who left Pink Floyd in 1986, has a tour of his album The Wall coming up in late 2010 and 2011.

If you would like to remain informed of developments in this news story and other news, then please make sure you are signed up to receive the free NPF Newsletter.

Source [The Guardian and The Telegraph ]
Top

I don't personally find it that annoying to have to download an entire album because that's what I do anyway. I very rarely just want one or two tracks off an album. But I can see how it could annoy many people. I do agree that many of Pink Floyd's albums are meant to be listened to as a whole, and not as individual tracks. But it could be argued that for all the times PF or one of the PF guys performs, say, Money or Comfortably Numb or Shine On Parts 1-5 in concert without the rest of the album, they themselves have established a precedent that it's okay to listen to the songs as individual pieces out of context of the rest of the album.
Top

I agree completely about them hand picking songs to play from albums out of the context of their original albums. Waters down their "argument" a little. But I guess they should be free to enforce their contract that they signed and not have EMI doing things that the band did not give them permission to do with their music.

It would be interesting to learn if the band has been adversely affected financially by the selling of individual tracks. Perhaps people are only buying one or two songs for £2 with perhaps £0.20 going to the band or something as opposed to £5-£10 for an album with £0.50-£1 going to them instead. Perhaps there is truth in the financial figures behind the story that I speculate about. Or they are just getting on a bit and are becoming a little grumpy and want to complain about things in the High Court!!

The rock legends, signed to EMI since 1967, said their contract meant their albums could not be split up without their permission.

A judge agreed, saying the contract contained a clause to "preserve the artistic integrity of the albums".

because with - A collection of great dance songs,Relics,Works, and Echoes (the best of Pink Floyd) Pink Floyd clearly preserved the artistic integrity of the albums by not splitting up the...oh wait they are compilation albums

oh but they gave their permission so that's alright then. artistic integrity my arse .

...probably done to fulfill the contract duties with the EMI.
Top

it will be interesting to see how much the fine is - if the band agree to donate the fine to a charity i might believe it was being done over the principle of artistic integrity espoused in the contract that EMI have been found to have breached.

Emi simply offered the albums for sale in a standard format for download - if the purchasers opted to only download one or two tracks that was the purchasers choice. if Emi created a bunch of singles or a whole new compilation from the albums then i would consider them in breach of the contract.

this seems to me to be just another grab for money.
this is very disappointing to me if it is.
Top

oz1701 wrote:Emi simply offered the albums for sale in a standard format for download - if the purchasers opted to only download one or two tracks that was the purchasers choice. if Emi created a bunch of singles or a whole new compilation from the albums then i would consider them in breach of the contract.

this seems to me to be just another grab for money.
this is very disappointing to me if it is.

The band own the copyright of their own music and are legally entitled to dictate in contract how the music is distributed. EMI decided to ignore the contract and the High Court found in favour of the band.

Now I am sure two things are probably at play here. Firstly probably money as selling a single song will earn them less than an album. A casual fan had to buy an album in the past to get the song they like. Now they can download the one. So I imagine this has lost the band money on their royalties. So why would EMI do that as they are probably earning less money too. Madness.

Secondly, perhaps the band are proud of most of their music (I think Gilmour did admit the Momentary Lapse of reason album was poor and dated so perhaps not of this album) and want it keeping as intended as one continuous piece. But how then would they explain the Echoes best of album? I suppose they did do work on it to make it flow as one continuous piece but the songs were taken out of context there too which seems to defeat the argument they sued EMI for creative reasons.

Mmmm. Money is good I guess. Well done that band!

On a related but slightly random not, the story they won is currently the 5th most read story on BBC News and is the most emailed! I didn't know a piece of news like this would be that popular on the grand scheme of things. Perhaps this was known in advance and that is why they started that new competition the other day and the stamps thing as a PR distraction away from the business side of things. Who knows!
Top

well i am not a lawyer and i have not seen the contract in its entirety so i am ill equipped to judge. however i know you can make legalese mean anything you want it to mean - until a judge decides what it means (legal precedent). i wonder how many other musicians will now come out of the woodwork who have the same thing in their contracts - it could be a legal nightmare for the record companies. that would be a shame.
Top

Well the precedent would be set based on the condition that the contract stipulates the "albums" may not be "unbundled". It would seem the angle EMI took was that the contract said "albums" could not be unbundled but they argued that means a physical CD.

It will be interesting to see who pops out of the woodwork now that the money has been spent setting the precedent. I recon Lars Ulrich will be on the case somewhere!!
Top

It's just come on the news. They've won. I think that counts as a round one knockout too!

I didn't realise what this case was about. I thought it was about unpaid royalties which is what i have been reading but today's judgement is about Floyd trying, and succeding in stoping E.M.I selling traggs song by song rather than as the 'seemles whole' of the album. I wish E.M.I had won 'cause one of the things i'm looking forward to getting an ipod for is to listen to WYWH without WTTM & HAC which i hate.
Top

congrats to the band!
Top

....Why would you want to hear that album with "Shine On Part 1", a sudden cut to "Wish You Were Here", then "Shine On Part 2"? The two sides are seamless suites, leave them alone!
Top

Flying pig437 wrote:It's just come on the news. They've won. I think that counts as a round one knockout too!

It's been in the news even here.