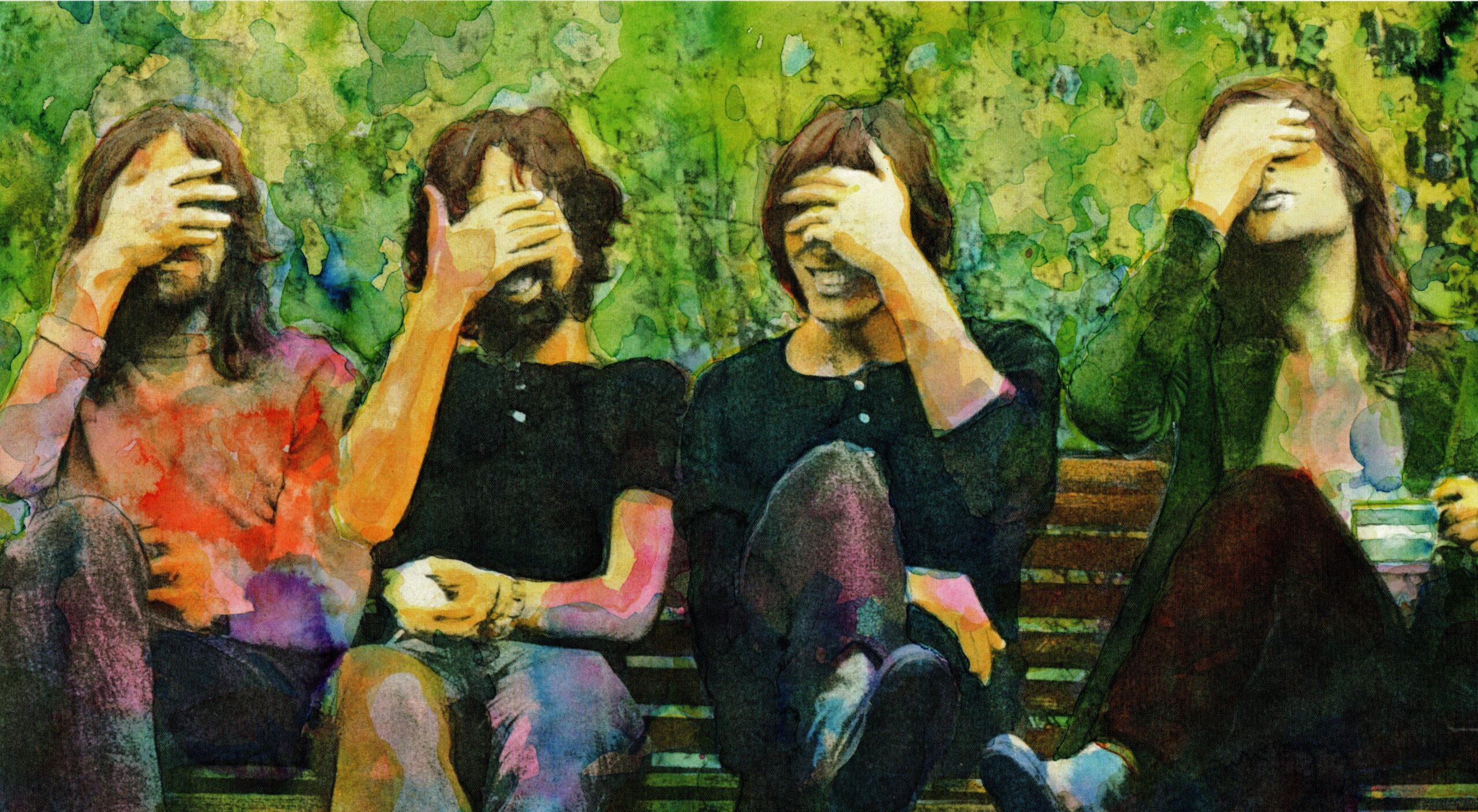 Pink Floyd has an enormous body of work for fans to choose from and this page is intended to help new fans navigate the back catalogue and discover parts of the catalogue that they are more likely to enjoy. Essentially, there were three periods of the band and are all quite distinct in terms of who was leading the band, the songwriting, production and visuals. All three eras are exceptional in different ways and are explored below along with a little information about each album.

Although the Pink Floyd sound was a creation of all band members, Syd was certainly very popular on the UFO and underground music circuit. He wrote most of the band’s first album Piper at the Gates of Dawn and is a whimsical and original creation. Unfortunately, Syd was not in a good place with his mental health and drug usage so the band left him behind one day on the way to a gig and introduced David Gilmour to the band instead. The rest is history. Luckily, Syd wanted to be a painter anyway.

Roger naturally took over as leader when Syd left. He would spend several albums finding his feet with songwriging and discovering his style. He continued Syd’s lead over his first six album from A Saucerful of Secrets to Obscured by Clouds. Then along came Dark Side of the Moon that had phenomenal commercial success and cemented the band in rock and roll history. Roger pressed on further with his concept albums with Wish You Were Here, Animals, The Wall and “the wall leftovers” in the form of The FInal Cut. Roger then left the band and expected the band to end, It continued.

David Gilmour – the voice and guitar of Pink Floyd

David had spent a huge part of his life being the guitar and voice of Pink Floyd and certainly did not want it to end just because Roger Waters had left. David’s contributions musically to the band had established him as one of the best guitarists in the world. The albums released under David’s leadership continued the bands exploration of the latest equipment and studio techniques. This meant drum machines, more modern studio production techniques and collaboration with his wife Polly Samson who provided many of the lyrics to this era of the band. She doesn’t get near enough credit. The tours were a phenomenal success and gave birth to the amazing Delicate Sound of Thunder and Pulse live video recordings. Before this era, sadly, there are not really any proper recordings of the live shows beyond bootlegs. Who would want to watch a concert again? Me!!

Pink Floyd’s debut album was released on 4th August 1967 on the EMI Columbia label and took its name from chapter 6 of the Kenneth Grahame 1908 novel The Wind in the Willows. It was mainly written by Syd Barrett and features an whimsical collection of amazing psychedelic rock songs. It also has a Roger Waters song and two written by the whole band.

The second album features only one song from band leader Syd Barrett in the form of Jugband Blues as he had largely left by the time this album was being worked on. He was replaced by David Gilmour who initially stepped in to support a deteriorating Syd. The album was released by EMI Columbia on 29th June 1969 in the UK and on Tower Records in the USA on 27th July 1969.

Pink Floyd’s fourth album was released on 7th November 1969 by Harvest Records. The first half is a live recording from both the Mother’s Club in Birmingham from 27th April and the College of Commerce in Manchester from 2nd May. The second half was a studio album with songs contributed from all members of the band.

Meddle is the sixth studio album by English rock band Pink Floyd, released on 31 October 1971 by Harvest Records. The album was produced between the band’s touring commitments, from January to August 1971 at a series of locations around London, including Abbey Road Studios and Morgan Studios.

Obscured by Clouds is the seventh studio album by the English progressive rock band Pink Floyd, released on 2 June 1972 by Harvest and Capitol Records. It is based on their soundtrack for the French film La Vallée, by Barbet Schroeder. It was recorded in two sessions in France, while they were in the midst of touring, and produced by the band members.

The Dark Side of the Moon is the eighth studio album by the English rock band Pink Floyd, released on 1 March 1973 by Harvest Records. Primarily developed during live performances, the band premiered an early version of the record several months before recording began. The record was conceived as an album that focused on the pressures faced by the band during their arduous lifestyle, and dealing with the apparent mental problems suffered by former band member Syd Barrett, who departed the group in 1968. New material was recorded in two sessions in 1972 and 1973 at Abbey Road Studios in London.

Wish You Were Here is the ninth studio album by the English rock band Pink Floyd, released on 12 September 1975 through Harvest Records and Columbia Records, their first release for the latter. Based on material Pink Floyd composed while performing in Europe, Wish You Were Here was recorded over numerous sessions throughout 1975 at Abbey Road Studios in London.

Animals is the tenth studio album by English rock band Pink Floyd, released on 23 January 1977 through Harvest and Columbia Records. It was recorded at the band’s Britannia Row Studios in London throughout 1976, and was produced by the band. The album continues the longform compositions that made up their previous works, including Wish You Were Here (1975). The album received positive reviews from critics and was commercially successful, reaching number 2 in the UK and number 3 in the USA.

The Wall is the 11th studio album by English rock band Pink Floyd, released 30 November 1979 on Harvest and Columbia Records. It is a rock opera that explores Pink, a jaded rockstar whose “wall” represents his eventual self-imposed isolation from society. The album was a commercial success, topping the US charts for 15 weeks, and reaching number three in the UK. It initially received mixed reviews from critics, many of whom found it overblown and pretentious, but later received accolades as one of the finest albums of all time.

The Final Cut (subtitle: A Requiem for the Post War Dream by Roger Waters) is the twelfth studio album by English rock band Pink Floyd, released on 21 March 1983 in the United Kingdom and on 2 April in the United States through Harvest and Columbia Records. It comprises unused material from the previous Pink Floyd record, The Wall (1979), alongside new material recorded throughout 1982.

A Momentary Lapse of Reason is the thirteenth studio album by the English progressive rock band Pink Floyd, released in the UK and US on 7 September 1987 by EMI and Columbia. It was recorded primarily on guitarist David Gilmour’s converted houseboat, Astoria.

The Division Bell is the fourteenth studio album by the English progressive rock band Pink Floyd, released on 28 March 1994 by EMI Records in the United Kingdom and on 4 April by Columbia Records in the United States. The second Pink Floyd album recorded without founding member Roger Waters, The Division Bell was written mostly by guitarist and singer David Gilmour and keyboardist Richard Wright. It features Wright’s first lead vocal on a Pink Floyd album since The Dark Side of the Moon (1973). Gilmour’s fiancée, novelist Polly Samson, co-wrote many of the lyrics, which deal with themes of communication. It was the last Pink Floyd album recorded with Wright, who died in 2008.

The Endless River is the fifteenth studio album by the English rock band Pink Floyd, released in November 2014 by Parlophone Records in Europe and Columbia Records in the rest of the world. It was the third Pink Floyd album recorded under the leadership of guitarist David Gilmour after the departure of bassist Roger Waters in 1985, and the first following the death in 2008 of keyboardist Richard Wright, who appears posthumously. Gilmour said it would be the final Pink Floyd album.

Is There Anybody Out There?

The Bes of Pink Floyd

A Collection of Great Dance Songs

Echoes: The Best of Pink Floyd

The Best of Pink Floyd: A Foot in the Door

Oh, By The Way

One of These Days (EP)