This thread is to discuss Pink Floyd's Atom Heart Mother and is linked to from the Pink Floyd Discography section. 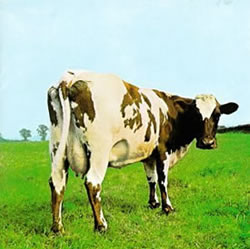 . I've tried many times to get into it but it never really inspires me for some reason. I love Fat Old Sun and If though so it's really the major pieces I have problems with.
Top

Why am I not surprised this garners more threes than anything else? It's quite good all-around in my book, but I would not go so far as to call it a great album. However, the three middle songs in particular are very, very good. I like the opening and concluding tracks, too. Perhaps Pink Floyd's most "average" album...
Top

For me this is the album where Pink Floyd went away from Barrett's psychedelia and found their modern/own sound , the one they were going to develope in Meddle and perfect in Dark Side. I think is a pivotal album than neither the band nor the majority of the fans has managed to assimilate its importance quite well. And let's not forget it was the album that put the band into the spotlight again, first No.1 album for them. Although that popularity can be attributed to the work of Ummagumma paving the way for it -- another album whose role in the history of the band is retrospectably downplayed.
Top

I would agree that the three middle songs are the best, in my opinion. I feel like the last song gets a bit boring and just kind of ends. But that's just me.
Top

I quite like the AHM suite. It's a bit cheesy in parts but has more good bits than bad bits. It's also a bit of a dry run for Echoes I think. Thank heavens they'd got the brass out of their system by then! The three "proper" songs are nice. My favourite would be Fat Old Sun, though the version here doesn't do the song justice. Alan's Psychotic Breakfast on the other hand: Meh

I think that had the band spread the three parts of Alan's Breakfast all over the album, like a conceptual thread running all over it, AHM would be rated as good an album as Meddle by most people, even better.

That way people would actually LISTEN to how good the music of APB is (not great, but good still) and would stop focusing only on the 60 seconds of concrete breakfast SFXs.

I wouldn't go as far as calling AHM my favourite PF album, but it is the only album by them that, for me, doesn't contain a single weak track. I think it's just a lovely album from start to finish. I never understood the hate-on so many fans have for Alan's Psychedelic Breakfast. I fell in love with that piece the first time I heard it. What's so bad about it?
Top

Massed Gadgets wrote:I never understood the hate-on so many fans have for Alan's Psychedelic Breakfast. I fell in love with that piece the first time I heard it. What's so bad about it?

I quite like it and actually listened to it earlier while relaxing. I find the sound effects and speaking parts are very amusing. The munching on the cereal part always gets me nice and hungry

I LOVE this album. The only parts that fall flat for me are the experimental parts of AHM and Fat Old Sun. Otherwise, I love it - even APB.
Top

Love from start to end, best are FOS and AHM. The latter is quite underrated.
Top

For me, this is one of the weaker PF albums, and therefore just gets a three. I like the live four-man "Atom Heart Mother" much better than the overly-orchestrated Geesin version.

"Fat Old Sun" actually sounds quite demo-ish, and also too short. Once again, the early 1970's live versions were better.

I do like the remaining tracks, especially "Alan's Psychedelic Breakfast", a worthy piece sound effects experimentation, with nice musical movements in between.

"If" and "Summer 68" - fine songs, both of them, but not the best work their respective composers have ever delivered.
Top

Like every Pink Floyd album, I have to be in the right mood for Atom Heart Mother, however, when I am in the mood I thoroughly enjoy this album.

The opening epic is simply brilliant, and I've recently discovered that the band had no trouble pulling it off live. The three middle songs are nice, but that's about all; If is a lovely pastoral number which, although repetitive, doesn't get boring. Rick's Summer '68 is nicely done, and another good use of horns, the song also shows Rick thinking more about the lyrics instead of just the music. Fat Old Sun is the best of the three 'proper songs' - another pastoral song, I think the electric guitar works. Finally, Alan's Psychedelic Breakfast is a nice bit of experimentation which actually, if you listen closely has some wonderful musical aspects, perhaps these are overshadowed by the sound effects?

Generally it's a fine early album, and definitely a breakthrough from The Floyd which would then be consolidated on Meddle. I have given this album a 4, maybe a bit generous, had the ratings been out of 10, this would've got a 7.

A good album for sure.
Top

Stephen wrote:I always feel I should like this album more than I do

. I've tried many times to get into it but it never really inspires me for some reason. I love Fat Old Sun and If though so it's really the major pieces I have problems with.

I feel the same. This record has very good moments, like the three songs in the middle, and the first part of the "Atom heart mother" suite. It was a very nice experiment to do, especially the fact of mixing the band with a classical band, although the outcome wasn't "excellent" in my opinion. It's very interesting to notice how their sound changed in their next release ("Meddle") compared to this one.