David performed at the celebrity britains got talent, in which he performed with a drunk kate moss who seemed to be very affectionate towards him, you still got it david

...first time I see our Davey with that guitar in his hand.
Top

I wonder what did Polly think?
Top

She probably isn't as happy as Kate was

In love with David G
Blade

In love with David G
Blade

...first time I see our Davey with that guitar in his hand.

I think the length of his guitar strap is the least of his worries...

...it's not his guitar...
The crowd envited him to play something so he probably picked it from the musicians who were allready playing.
Top

Dude has gained some weight. Especially in his face...looks flabby and grampa-ish. And in America at least, that outfit is geeky. 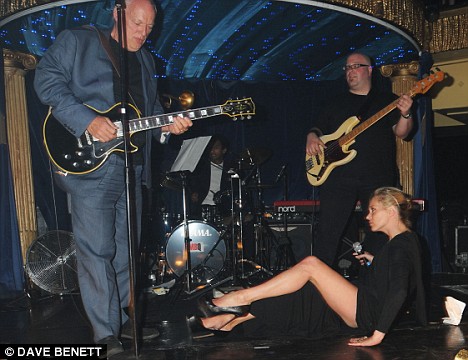 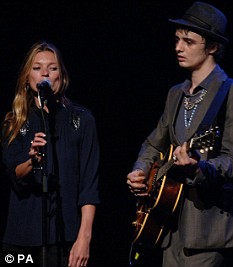 before this song, Pete saw her coming and briefly played "There she goes (a little heartache)"

*a song from the latest Babyshambles studio album, a dedication to Kate.
Top

Photo Gallery from This Is London
Top

Seen the photos from Hoping's Got Talent and the performance by the one and only David Gilmour and the one and only they say supermodel 'Kate Moss'. I am very happy that there is charities like this fundraising event to go to the children of Palestine but the celebrities being shown obviously intoxicated and writhing around on the floor and on ones knees would 'piss me off' if I was the wife of one certain Mr.Gilmour.

The leaving party shots were also a testament that these 'talented' people who are in the public eye all the time get ' wasted' and call in ' charity'..

I have never seen a bad photo of Polly Samson ( David's wife) but she herself looked like she also had 'one tooooooo many'.....not good

...In the meantime, I will continue to go about my business and I just had to state my opinion here. Polly what the hell were you thinking as Kate Moss was on her knees and writhing around the floor in the mini black dress

I am indeed a huge fan of hers but come on she is 'human'!? Isn't she

Have a great day
Linda
Top

It was all a spur of the moment.
They did plan all this. Dave only played the geetar. He did shag her on the stage...jayzus.
Plus, this is Kate Moss we are talking about... she not really a Mother Theresa.
I dont think Polly felt threatened by that immoral girl ... yet alone on stage infront of the camera and crowd.
Top

noone recorded it?
Top
16 posts