Nick Mason's Saucerful of Secrets starts touring again on 13th March in Ireland before hopping over the water to England in York.

I, myself, am going to watch the show for the first time in Manchester, England. Are you watching the tour? Have you been? Let us know.
Top

I will see them in Munich. Very exited about this as it will be in super small but famous location, Circus Krone. Every seat like front row basically.
Top

I've got a ticket for the 13th April in Dublin, I canna wait, only caught Gilmour's Floyd before in 1988 at Manchester, so it will be nice to see Nick a bit closer as I think he was about the size of an ant when I seen him in Manchester I was that far back.
Top

We're happy to announce that the 2022 North American tour that Nick Mason's Saucerful Of Secrets were due to perform at the start of the year has been rescheduled for later this year, running from September to the start of November. Sadly, six shows weren't able to be rescheduled as the venues weren't available when the band were, and three shows have moved venues within the same cities, but eight new shows HAVE been added to the tour in different locations, and tickets for those go on sale Friday (March 25th) at 10am local time.
“We are really looking forward to returning to North America and we’re happy to be able to now announce these new dates for later this year,” says Nick Mason. “We wanted to make sure to come back when it’s safe for our fans, the band, and our crew.”
Existing ticket holders should be contacted by their point of sale; for unchanged venues, existing tickets will remain valid for the new dates, and if your venue is changing you'll have a presale for new tickets ahead of the general sale. Visit www.TheSaucerfulOfSecrets.com for dates, locations and ticket links.

Belgrade 1 june for me. FOS ticket costed me only 40 euros (and the other category is 27 euros), but that's eastern Europe for ya.

Was at the Dublin gig last night - won't spoil the setlist for those going to see the tour but I guess I'm not letting the cat out of the bag by saying Echoes was phenomenal.

For the opening night of the tour the band were very tight , Nick had a couple of little mishaps but himself and Guy laughing at each other when they happened was fun to watch.

Light show and back drops were great, sound was perfect. 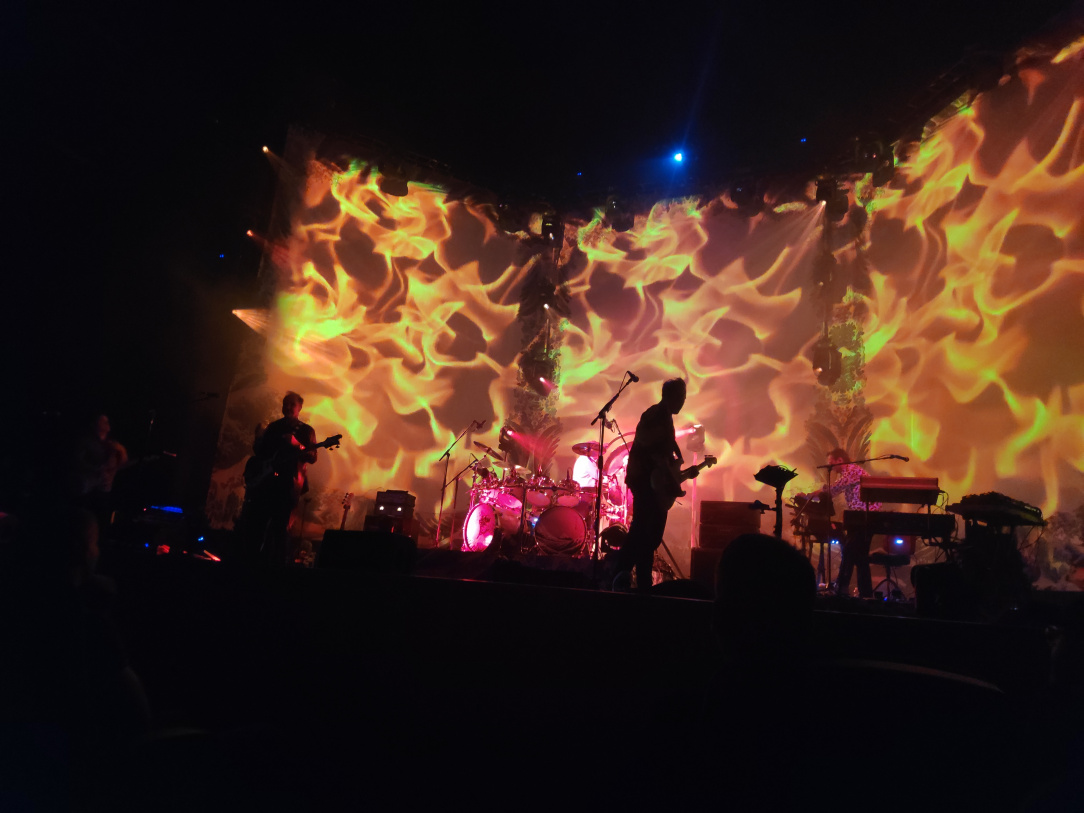 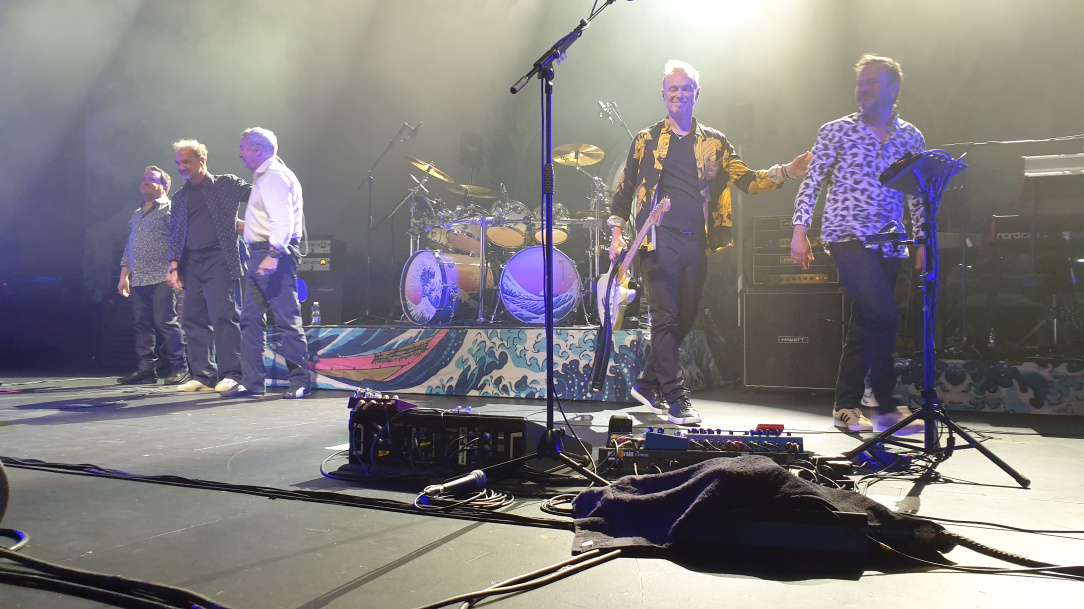 Also ... I'll forgive Nick for saying it's the first time he's played in Ireland for 50yrs. He obviously forgot he guested with Roger in Cork in 2006 for the DSotM set (see bootleg Tripped Out In Cork)

... Here's Echoes from the Dublin show

I did think about you the other day when I saw Nick was playing Dublin and yeh Tripped out in Cork what a wonderful show that was and the Marquee festival is one of my Favs ever. The last time I was in your fair isle was 2007 to see the Flaming lips at the marquee
Top

I did think about you the other day when I saw Nick was playing Dublin and yeh Tripped out in Cork what a wonderful show that was and the Marquee festival is one of my Favs ever. The last time I was in your fair isle was 2007 to see the Flaming lips at the marquee

Hi drafsack,
Good to hear from you. Hope all is well with you. The Roger show in the Marquee will remain one of my fav ever shows - apologies once again for not meeting up at that one. I haven't been back to the festival since 06 ... nothing really grabbed me or if they did they were playing closer to Dublin. I hear it may be coming to an end as that part of the docklands in Cork is going to be redeveloped.

Playing Echoes live marks yet another song that Guy Pratt has had the honour of playing live with Pink Floyd, David Gilmour and now Nick Mason. He’s become quite the veteran these years…
Top

Here's a review from the DT -

Compering from behind his kit in the faltering tones of a grandpa giving a wedding speech, Nick Mason joked at the outset, “I wonder if any of you were present the first time Pink Floyd played here in 1966 – I think some of you were, but you may have forgotten. We’re certainly over-excited to be here, so watch out for some crowd-surfing!"

In pre-pandemic 2018-9, Nick Mason’s Saucerful Of Secrets emerged as the unforeseen success story amongst heritage rock reunions, playing in the US and at festivals across Europe and eliciting rave reviews at every stop.

In an industry predicated on original membership, here was an iteration of prog-rock giants Pink Floyd featuring only their rather sedate drummer, and fronted by Gary Kemp, the seemingly unqualified bassist from New Romantic fops Spandau Ballet. On paper, all marketing rationale on this project would’ve pointed towards catastrophe.

Mason again endearingly quipped of Kemp’s hiring, “It was all rather vague – Gary thought he was going to be working with Roger Waters [Floyd’s long since ostracized founding bassist], and I thought I was getting [Spandau singer] Tony Hadley..."

The canny sticksman’s angle, however, was to use this necessarily reconstituted combo to revisit Floyd’s early repertoire drawn from the seven albums leading up to 1973’s Dark Side Of the Moon – all much loved but long since overlooked in surviving members’ setlists.

That era-defining long-player sent the band on a more bombastic and stadium-pleasing trajectory, increasingly a low-tempo vehicle for guitarist David Gilmour’s protracted soloing, but also one soon dogged by studio and touring inertia. Indeed, that slo-mo, noodle-heavy vibe was very much in evidence a fortnight ago, with the release of the Ukraine war protest song Hey Hey Rise Up, the first track that survivors Mason and Gilmour have released under the Floyd name in 28 years.

By contrast, Saucerful Of Secrets explore the band’s origins in fierce experimentalism. The only concern on this much-postponed second UK lap was whether the pandemic had diffused their initial intensity.

Far from it. The dextrous quintet were soon gleefully blasting forth Arnold Layne, Floyd’s proto-psychedelic debut single from 1967, penned by wayward genius Syd Barrett. Saucerful and latter day Floyd bassist Guy Pratt noted that the song was last aired at this venue by David Bowie circa 1973’s Pin Ups. Kemp, at 62 a connoisseur of pop’s evolution through the 1970s, brought glam-rock swagger and Bowie-esque inner-London phrasing to a sprinkling of Barrett material; a double-whammy of Candy And A Current Bun and Vegetable Man, meanwhile, felt more like fabulous 1976 punk brutalism.

At the other extreme of early Floyd’s zigzag narrative, If and Set The Controls For The Heart Of The Sun each veered from arcane folk-song into pulsating instrumental improvisations. After a half-time breather, the two strains collided on Barrett’s Astronomy Domine, whose tempo-shifting nuttiness seemed to wrong-foot a couple of its players. But Mason, never exactly the wildest tub-thumper, admirably soldiered through like a young ’un.

The show’s crowning glory, freshly unearthed for this tour, was Echoes, the 23-minute progressive bonanza from 1971’s Meddle. Its labyrinthine movements veered from space-station bleeps, through Kemp’s ferocious fret-mangling, to second guitarist Lee Harris seemingly turning his six-string into a theremin. The whole Hall was brought to its feet in awe.

Age, infirmity and inclination permitting, this one’ll run and run.

PS,
(1) Gary Kemp played the guitar in Spandau Ballet - not the bass
(2) Not an error, but maybe noteworthy, David Bowie sang Arnold Layne with David Gilmour at The RAH in 2006
(3) David Gilmour always plays some early stuff - it’s not ignored.
Top

I made it to two of the gigs on this tour. The gig in Dublin (in a very fancy venue) and the Royal Albert Hall last weekend. I really enjoyed both but thought it took a while for the band and the crowd to get warmed up on each occasion. It was great for yours truly to hear those old songs being performed live and in general they nailed them. The highlight has to be Echoes which is far better than it ought to be and blew my little socks off. Being churlish, I'm sorry that Point Me At the Sky and Let There Be More Light have been dropped yet Burning Bridges and Vegetable Man remain. I'm also not a fan of their If/Atom Heart Mother medley which is a bit messy. But those are minor quibbles - they're a band who are having fun and it's giving Nick his turn in the limelight.
Top
21 posts