This thread is to discuss Pink Floyds - Echoes - The Best Of . 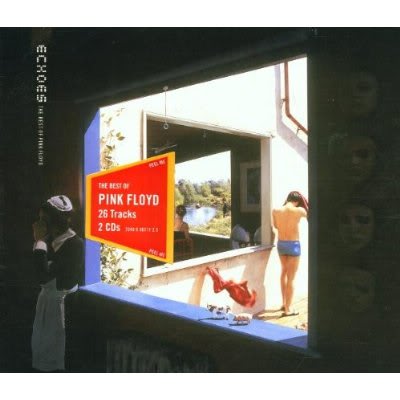 There's at least one or two tracks we would have put on instead, but it does what it says on the tin!
I remember another Pink Floyd thread with a chatbox and getting a cold reception for speaking good things about this.
Car journeys, home improvements, this album has it all! Only wonder why it took so long for the band to come together and plot the tracklisting? Although the story about Rick Wright giving all his songs 10 and the rest low marks probably explains the delay. And Roger wanting five songs from TFC if the Dave Gilmour interview at the time (I think it was in "Mojo"?) is to be believed.
So it's a full five marks.
Top

drafsack wrote:The Fletcher Memorial Home wouldn't have been my choice from the Final cut

"Two Suns In The Sunset" for me, is the perfect goodbye to Roger-Era-Floyd. But it must have been a struggle for the rest of the band to listen to? Didn't someone else play the drums on that? (Andy Newark wasn't it?) Plus there isn't much Gilmour guitar on it either.
And I'd have to include "Mudmen" too. Aside from that, a wonderful trip.
Top

Southampton Dock would have been my choice, but Fletcher was alright.

I only listened to this until today. Found some interesting things on it. It was really funny that they included Marooned (which was a good choice from TDB IMO, better than Keep Talking for sure!) but they cut it at 1:55 !!!!! WTF?? Also the abridged versions of Echoes and SOYCD were kind of lame, missing some of the best parts and the overall flow that made those songs great. Now I feel the need of listening to the A Collection of Great Dance Songs version of SOYCD to see if they did a better job there with the editing. Right now, as far as abridged versions of SOYCD goes, I like the PULSE version the best.

Also Bike should have been placed between SOYCD and Time, the chimes at the end of Syd's tune rhyme a lot with the bells at the begining of the DSoTM track. After High Hopes the song feels out of place and anti-climatic.
Top

This is a confused compilation. It should have been in chronological order. Astronomy Domine/Emily into Happiest Days/ABITW2? That's an absurd segue. Sheep is the best song on Animals? Really? High Hopes stuck in between 2 Barrett era songs? You can see all the different hands that were fighting for song placement in this project. It turns out a mess. If it could not be in chronological order, at the very least Jugband Blues should have been the last track instead of Bike. And Fletcher Memorial Home is not even close to being one of the best tracks on TFC. The Final Cut should have been on there. Or Gunner's Dream. Other songs that have no place on a pink floyd best of include Marooned, The Great Gig In The Sky, Keep Talking, Sorrow, When The Tigers Broke Free and Learning To Fly. Obscured By Clouds and Atom Heart Mother are not even represented. Either is More. All the studio albums should have been represented. If anything, leve off tracks from Momentary Lapse. Also, abridged versions of songs are often lame. 2/5.
Top

Generally, I agree with you. This album is a mess. I remember all the fuss about it back in the day it was about to come out (boy, it's been ten years already!), about how they tried to segue all songs one into another to make it flow as a "real Pink Floyd album", but they just made a mess with connecting songs that are not connectible with each other in no way. I mean, you could theoretically make a flow from a Barrett-era song to a pre-DSOTM-era song, and you could make a flow from a DSOTM/WYWH-era song to a Waters-era song or Gilmour-era song, but what they did on that album is hilarious. The wind transition on CD 2 is OK, but then again any idiot could link songs like that.

The choice of songs is also very messy, to say the least. There could have been better songs in there instead of "Marooned", "Keep Talking" and "The Fletcher Memorial Home", per instance. There's a lot of less famous songs in Pink Floyd catalogue that could have made a better choice than "When The Tigers Broke Free". About the choice of songs, Gilmour stated: "We’ve been arguing about it [track selection] since May. Nick sent us a list right at the beginning, then he seemed to lose interest. Rick never seemed to want to get involved in it. It wandered along rather fitfully until recently, when I thought I'd better work out what we should be trying to do with it, whether we should try and represent every album or not, and on what basis we should be choosing songs. In the end we had to get everyone to vote on a list. (...) I agree [that most of the songs seemed to have picked themselves]. When I look at it, its bloody obvious really. It's amazing how long the process has been getting it sorted out." It seems as they didn't really do much thinking after all...

The edited versions of songs were also quite unnecessary, if not completely hilarious. They had to cut a completely unnecessary last minute of "Sheep" to squeeze in two minutes of "Marooned" which don't mean anything. (Both songs quite unnecessary on a "best of Pink Floyd" album, as they are.) Edited version of "Echoes" could be suited for a nice showcase of the song, with every part still in there only shortened, but it damages the feel of the song badly, while "Shine On You Crazy Diamond" feels like it was butchered and then stuck together with a duct tape. "High Hopes" and "One Of These Days" are also unnecessarily shortened for about 15 seconds each. I never saw the point of that.

All in all, it's just another very messy compilation album in Pink Floyd discography.


I voted 2, merely because there's some great songs on it.
Top

I don't mind the songs not being in chronological order. I reckon it can only have been aimed at the casual music buyer who will have known Pink Floyd from a handful of songs and perhaps might have Dark Side of the Moon somewhere. So bogging them down in Syd Barrett era Floyd might not have been a good start. Some of the songs will have picked themselves of course but there are some odd choices on here. I can understand why they cut down Echoes and SOYCD because they're pretty long but they might as well have left Marooned off it altogether seeing as they have so little of it on the album. A pity seeing as that p!ss poor song with Stephen Hawking is on there in its entirety.
Top

And if they have edits of SOYCD and Echoes, then how much of an open goal was not including the final "Remergence" section from Atom Heart Mother seeing as it basically consists of all the better ideas from the first few parts of the whole Atom Heart Mother piece. I think I made a thread in the Fun & Games section where you picked your own tracklisting for Echoes.
The final band/brass and choir of Atom Heart Mother, imagine that at the end of disc 1?

(Maybe even the end of disc 2 if they were going to be really brave?)
Top

I do think that the non chronological order was a good idea, ripe for some interesting re-contextualization of the catalog, but it was very badly executed. You could create some amazing albums in that way, linking songs by mood, style and tone rather than just by release date. I for one got a decent kick and mild smile out of listening to Jugband Blues coming right next after WYWH, and the segue between Marooned and GGITS was nice too, although most of the other segues were not. I would have really liked to hear See Emily Play right next to SOYCD and not before ABITW2.

danielcaux wrote:I do think that the non chronological order was a good idea, ripe for some interesting re-contextualization of the catalog

I actually agree, despite how I worded my last post. I've made floyd comps that spanned their entire career and were out of chronological order, but flowed with a certain continuity that this set lacks.

Hudini wrote:"More" is represented by two tracks, "One Of These Days" and "Echoes", from which the compilation took its name.

I assumed Hudini was joking, thinking of Meddle, or he knew something I didn't know.

I don't know why I find it so appealing, but I love the segue from the telephone ringing at the end of Another Brick into the 'ping' at the start of Echoes on this album.
Top

Idisaffect wrote:I assumed Hudini was joking, thinking of Meddle, or he knew something I didn't know.

Boy! the new upcoming Floyd "Best of" makes "Echoes" look like a complete masterpiece! The tracklist alone fills me with the urge to defecate!

Hey You
See Emily Play
The Happiest Days Of Our Lives
Another Brick In The Wall pt2
Have A Cigar
Wish You Were Here
Time
The Great Gig In The Sky
Money
Comfortably Numb
High Hopes
Learning To Fly
The Fletcher Memorial Home
Shine On You Crazy Diamond (edit)
Brain Damage
Eclipse.
Top

"Best of" collections really don't work for Floyd, do they? Every one of them lacks something. My choice of their best material would fill 23 CDs at least.
Top
42 posts