The wonderful people of the NPF Forum have come together once again to produce something every Pink Floyd fan should have! It is called Double Coreand is an album of original music inspired by a hoax about a new Pink Floyd album!

The hoax was obviously just that, a hoax, so it was decided that the album would be recorded anyway… but by NPF Forum members!

Links – Discuss the project on the NPF Forum

The Story Behind Double Core

In late September of 2006, a user called Jambo started a thread at NPF called “Pink Floyd’s Next Album (hoax…..I think)” which contained a bogus cd booklet cover for a supposed Pink Floyd album called “Double Core.” Whoever had created this thing had also created eight song titles and even ascribed composition credits to the various members of Pink Floyd. Special guest appearances by Eric Clapton, Tim Curry and Sir Paul McCartney were even suggested on specific tracks.

Jambo wanted to know what everyone thought about it.

About six hours later, I took a look at it and thought that since the forum at NPF had already put together two seperate three-disc compilations of Pink Floyd cover songs, we obviously had the talent and means to create this album called Double Core. I mentioned this in the forum and about ten hours later, “cwta eugene” had composed and posted a poem titled “No Heaven And No Hell” from one of the songs on the hoax jacket.

It wasn’t very long at all before other users started claiming song titles and I started a thread to keep up with them. I decided to take “Silent Victory” in spite of the fact that the moment I saw “Come And See,” I could hear the beginnings of what has become that song. I was going to use “Silent Victory” as an opportunity to spill some bile about my first ex-wife and see if that made me feel any better.

Fortunately, Massed Gadgets came aboard the project and had a better idea for “Silent Victory.” Since no one had expressed interest in “Come And See” yet, I decided to make that my contribution. I quickly made a demo of the song and realized that the melody I had come up with sounded really familiar. I couldn’t place it as anything right off the bat, so I made a disc and played it for several of my fellow music geeks in the hopes that they could tell me whether or not I had subconciously lifted a melody from something. No one could think of anything…so I pressed on with it.

“Come And See” ended up being recorded during a transitional period in the development of my home studio. It’s the last recording on which I used my old Fostex cassette four track deck as my mixing board. It’s also the first recording on which I used my Behringer board. The process of recording “Come And See” could make a novel. Granted, it would be a rather boring novel…but, suffice it to say that I spent a good three to four months working on it and then another month or so mixing it.

In the meantime, I hadn’t heard anyone else’s stuff yet. They were all still working on their own songs and I had no idea how it was all going to fit together.

I think I received “Magnolia” first. I think so because I distinctly remember panicking when I heard it. I knew I had to bring “Come And See” up another notch and so went back to square one to re-record as much as I felt could actually be improved.

It wasn’t long before other contributions started coming in and I was able to see how they could all fit together. Regrettably, the intro to “No Heaven And No Hell” featured dialogue from the film “When The Wind Blows.” As that’s copyrighted material, I had to trim nearly thirty seconds from the beginning of the song and figure out how I was going to cover that. Without offering any spoilers, the solution presented itself when Stu’s (“simpledumbpilot”) contribution didn’t look as though it was going to be finished by the deadline I had first set, so I came up with another song and slotted it between “Silent Victory” and “No Heaven And No Hell.”

In the end, I blew through a couple of deadlines before I finally got the thing tamed and in a form that I could live with. I realized that I could tinker with it until doomsday, but at some point I was going to have to let go of it, knowing that there were things I could have done differently/better. I reminded myself that Dave Marsh had to ask Springsteen if he thought Chuck Berry never listened to “Maybelline” wishing that he had done things a little differently, before The Boss finally unleashed “Born To Run” on an unsuspecting world.

Someone much wiser than me once said that a work of art is never finished…it’s simply abandoned. Double Core takes the form it held when I finally said “I can live with this” and abandoned it.

For nearly eight months, Double Core dominated my spare time. Between figuring out the segues, perfecting my own tracks as much as I could and advising Floyd Council to the best of my ability on which pictures seemed to go best with which song, I treated Double Core the same way as I would one of my own albums…when I wasn’t at work or asleep, I was at work on the project. I made several “master” copies and listened to them on the way to work, on the way home from work, while resting up from work, etc. etc. etc.

It has truly been a labor of love, though…and in a way, “Double Core” is the ultimate “mossification.”

I sincerely hope everyone enjoys listening to this as much as I do. I sincerely believe this is the most “Floydian” think I’ve heard in a long, long time. Everyone involved did a fantastic job of presenting their idea of what the members of Pink Floyd might do with each particular song. I applaud us all.

We should do this again sometime. 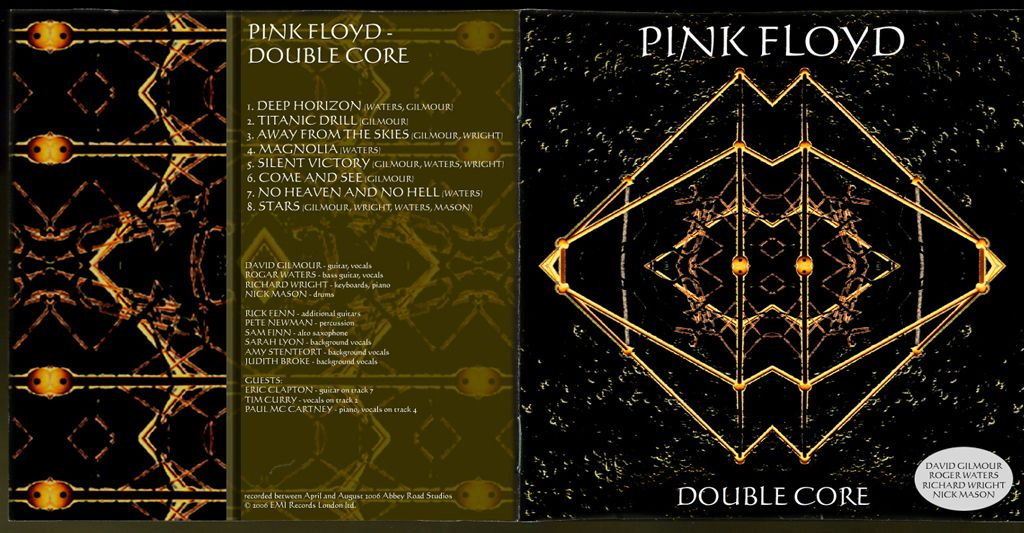