Win A Flight With Nick Mason With RAF 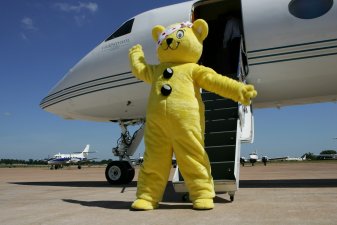 The BBC’s Children in Need Appeal is set to get off to a flying start next week thanks to Iron Maiden frontman Bruce Dickinson and Pink Floyd drummer Nick Mason.
The two qualified pilots are offering listeners to Terry Wogan’s breakfast show on BBC Radio 2 the opportunity to fly with them to the Royal International Air Tattoo at RAF Fairford in Gloucestershire next summer!

What To Do To Win

For more information, do visit Terry Wogan’s BBC Radio 2 Children In Need website. You can also listen to the radio show online here.

There will also be the opportunity to join Wogan’s Breakfast Show colleague and voice of the National Lottery, Alan Dedicoat, on a flight aboard a piece of military ‘heavy metal’ courtesy of the Royal Air Force. In the evening the winning bidder and their partner will be among the special guests at the prestigious Royal International Air Tattoo Gala Dinner followed by a night at one of the most exclusive hotels in the Cotswolds – Cowley Manor.

The following day, they will be treated to a VIP behind-the-scenes tour of the Air Tattoo – including a visit to the Air Traffic Control Tower – a flight in their own luxury jet courtesy of US aircraft manufacturers Gulfstream, plus they will have the chance to meet the world’s greatest aerobatics display team, the Royal Air Force Red Arrows.

A spokesman for the Air Tattoo said: “We’ve been associated with the BBC’s Children in Need appeal for a number of years and we are delighted to be in a position to take part once again. We are extremely grateful to Bruce and Nick for joining forces with us for what is a dream package for rock fans who have a passion for aircraft or aviation enthusiasts who love rock music.”