On An Island BBC Concert

Video Downloads: Where We Start – A Pocketful of Stones – Smile – Then I Close My Eyes – This Heaven – Red Sky At Night – Take A Breath – The Blue – Castellorizon – EPK – On An Island – Island Jam 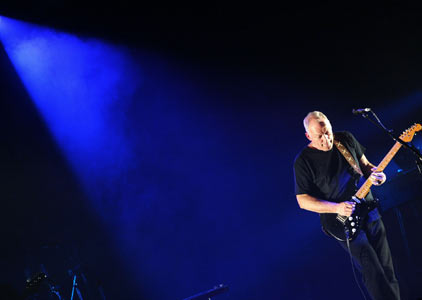 This story was reproduced from the wonderful Brain Damage site!

In front of an audience of competition winners, and a handful of David’s family and friends, a full house had the pleasure of seeing a wonderful performance – which everyone will have a chance to hear on Saturday, with highlights of the show viewable online and on BBC Interactive TV.

David played a well-balanced set, combining tracks from his new album “On An Island”, with a selection of Pink Floyd classics. We have no intention, though, of spoiling any surprises in terms of the set; you’ll have to wait until Saturday! Suffice it to say, you will NOT want to miss the broadcast…!

The performances were superb – the touring band seemed tight and well-rehearsed, and worked well together.

A nice, subtle touch was Guy Pratt’s t-shirt, with its “Didn’t They Do Well?” message – many older fans will recall David having a t-shirt with the same slogan in the early 1970s!

To hear and see the concert on Saturday, this is what you need to do. BBC Radio 2 can be heard in a number of ways. Those in the UK and Europe can receive the station via FM or DAB radios, or via satellite, cable and freeview TV systems. However, listeners worldwide can tune in via the excellent Listen Live/Listen Again facilities at www.BBC.co.uk/radio2.

An hour-long audio recording of the concert will air at 8:30pm GMT on Radio 2. Once that has finished, you will then be able to WATCH highlights of the concerts!

Utilising the power of their interactive service, those with access to BBCi on their digital TV services, will be able to see 30 minutes of the concert by pushing their red button on their remote between March 11th and 14th. Broadband users will also be able to watch a 60-minute edit of the concert via the Radio 2 website. This is Radio 2’s first interactive TV production.

You may want to enter the competition to win tickets to The Royal Albert Hall to see David on the 31st here.

Additionally, the BBC are running a competition for 4 copies of On An Island here.