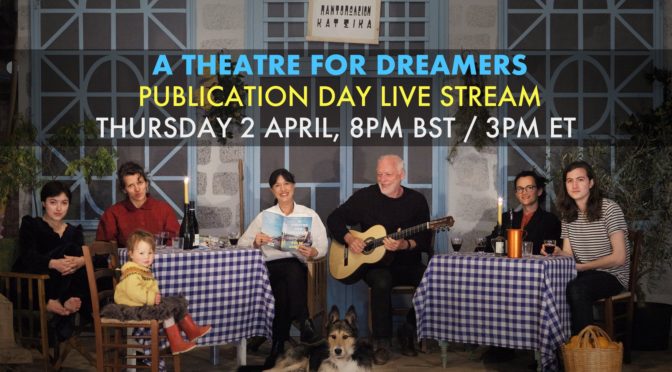 Pink Floyd’s David Gilmour and writer Polly Samson will appear in a live video stream tomorrow to publicise the new book A Theatre of Dreamers. It will also feature new material from David Gilmour performed live.

Polly Samson, who is married to David Gilmour, wrote lyrics for Pink Floyd and David Gilmour solo work and features on albums Division Bell, A Momentary Lapse of Reason and On an Island. The Endless River, Pink Floyd’s last studio album, had Polly’s lyrics on Louder than Words.

Originally, the book launch was to be accompanied by three live events at Manchester, Birmingham and London, UK. These events have been postponed to later in the year. Each of these special events will feature Polly Samson in conversation with journalist Rosie Boycott, readings, film and live music, including a new song Yes, I Have Ghosts written by David Gilmour and Polly Samson.

The audience will be transported to the Greek island of Hydra in 1960, and a world dancing on the edge of revolution, where a circle of poets, painters, writers and musicians live tangled lives. It’s a story of utopian dreams and innocence lost, of the troubled King and Queen of Bohemia, Charmian Clift and George Johnson, of a young poet named Leonard Cohen, and his Marianne; and of Erica Hart, an 18-year-old in search of answers.

Many artists have turned to Facebook recently due to the Coronavirus shutting down tours and appearances. The Gilmour’s will be broadcasting live, probably from their home in Brighton on England’s sunny south coast, at 8pm BST on Facebook.

Sadly, our launch events for Polly Samson’s new book A Theatre For Dreamers – out tomorrow – had to be postponed, so we’re having a go at doing something live from home with the family on Facebook on release day. Join us at 8pm BST tomorrow (Thru 2nd April) here on Facebook.

It will be a live streaming event so should appear on David and Polly’s Facebook pages so be sure to check the links out below at 8pm BST. Note that we are in “British Summer Time” in the UK so that is GMT+1 hour. If you are fumbling around for the live broadcast and can’t see it, it could be an hour later than you expect.

If you would like to order a copy of Polly’s new book, set in the Greek Island of Hydra where Leonard Cohen made many memories, then get yours from Amazon.co.uk 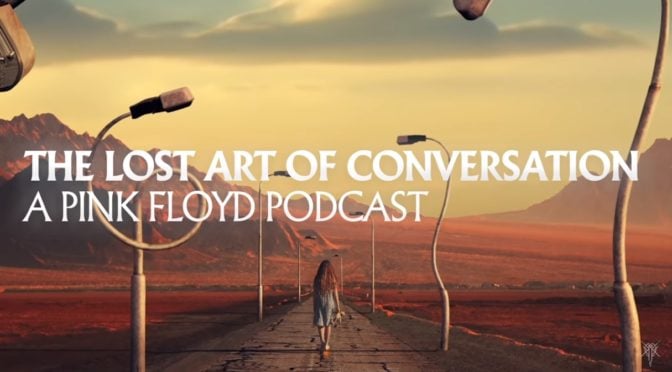 To celebrate the 13th December release of Pink Floyd The Later Years, David Gilmour has given his only interview to BBC Radio’s Matt Everitt, published as a podcast, ‘The Lost Art of Conversation’. The 4-part series will be available in weekly parts, starting today (26 Nov).

In the series, David discusses Pink Floyd as they reassembled after Roger Waters’ departure, as well as legal battles, the 80s, 90s politics and The Big Spliff. Covering the material and stories featured in The Later Years box set, the episodes are split into four key themes from the band’s career from 1987 to the present day, including The Studio, Artwork, Live Performances, and Unreleased New Material.

Parts 1-4 are now available in full below and, if you want to listen on Spotify or another platform, then you can use this link to choose other ways to listen to the podcasts.

Pink Floyd The Later Years is available to pre-order. A 2-LP/1-CD ‘Highlights’ package will be released on Friday 29th November. Read all about the different packages available.

If you have enjoyed the first part of the new podcast and you are looking for more, then David Gilmour did a podcast series to promote the sale of his guitars, check that out.

Whilst you are here, take a listen to a further preview from the Later Years box set in the form of a remixed Sorrow track.