Guy Pratt Events in May and June 2009 – London, Leeds and Manchester 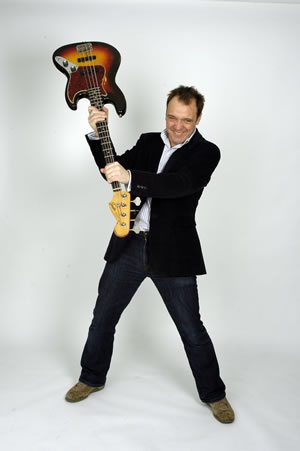 Guy Pratt, who played bass for Pink Floyd after Roger Waters left and more recently on David Gilmour‘s On An Island tour, is appearing at two events in Northern England and one in the South in May and June 2009.

“Notting Good Taste” is in fact quite the opposite. It’s a round-up of some of the best comedy talent around, served up in tasty morsels, resulting in a full serving of mirth and laughter.

It is hosted by internationally renowned musician and comedian Guy Pratt, whose 25 odd years spent living in the area seems to make him think he has the right to front something like this.

This time round we have Phill Jupitus headlining, with Elvis McGonagal and Alan Francis in support and The Stillhouse Orchestra playing live in the foyer.

£15 admission in aid of MS Society
includes free Martin Miller’s Gin cocktail
served between 7.30pm and 8.30pm
Food will be served in the interval

Tickets available on the door and in advance from http://www.wegottickets.com/event/47956

You can read loads more info on Guy’s Blog.

In addition to the stand up show above, Guy has just been booked to show off some equipment for Ashdown Amplification, share a few stories, have a beer and a general chat with the public at Professional Music Technology shops in Leeds and Manchester, England.

Professional Music Technology (P.M.T) and Ashdown amplification are proud to announce an evening with Guy Pratt at the Leeds store on Thursday 18th June, and the Manchester Store on Friday the 19th of June at 7pm. Guy Pratt is one of the most renowned bass players in the world working with acts such as Roxy Music, Madonna, Michael Jackson, Robert Palmer and of course Pink Floyd and David Gilmours band.

It promises to be an amazing night with tickets just £5 with no booking fees or any of that rubbish! The ticket will include entrance to the show and beer and food!!!! There will also be prize draws on both nights.

Due to the nature of the venues tickets are very limited and are already selling fast. To get yours visit either Manchester or Leeds branches of PMT or phone-

If you have any questions about the P.M.T events, then ask on this thread on the NPF Forum that the chaps from P.M.T started.