Links – Idea Generation Gallery | View Storm Thorgerson Artwork in our Pink Floyd Pictures gallery | Be sure to follow us on Facebook, Twitter and get our free Newsletter to remain informed of Pink Floyd News! 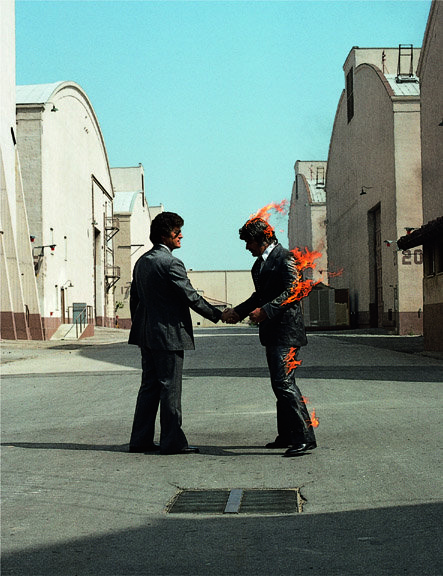 BIG & SMALL illustrates the vast diversity of format now facing music designers, from billboards to digital downloads and postage stamps. In particular the show features enormous high quality fine art prints at 5 foot square that are by far the biggest they have ever attempted, of album covers from Pink Floyd, Led Zeppelin, Muse, The Mars Volta et al derived from original art and individually supervised.

Much of Storm’s work is of filmic quality and epic proportions with complex, idea driven themes and a preponderance for landscapes, humour and contrariness. There is a mysterious element to the work but the meaning is less important than the finished result. It matters more that the musicians and the fans like it, not that they get the meaning, just as it is with songs where people are in effect free to make their own interpretations.

Make Your Own Album Cover!

The new exhibition includes interactive installations that allow members of the public to make and take their own versions of certain album covers . Live events will also take place throughout the exhibition making this a truly immersive experience.

Storm Thorgerson started Hipgnosis with Aubrey Powell in the late 60s and produced covers for bands including Pink Floyd , Led Zeppelin , Black Sabbath , Genesis and 10CC . As StormStudios with Peter Curzon he began working with The Cranberries , Catherine Wheel , Muse , The Mars Volta , Ian Dury and Biffy Clyro to name a few . Despite advanced years, difficult disposition and being somewhat unloved by record companies, he continues to work.