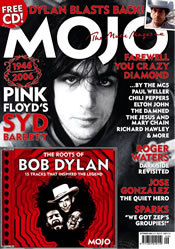 Join Paul Weller, Elton John and Wayne Cramer as they remember and celebrate the life of the torn genius of Pink Floyd’s dark star.

When you get your hands on a copy of this, be sure to discuss the contents of the magazine on the forum! We nearly have a quarter of a million posts on the forum and thousands of members! It’s a fun place! If you need some tutorials on how to use the forum, click here.

On the eve of the release of Modern Times, public passion for Bob Dylan is at fever pitch. But near-death, the Dead, self-hatred, the Pope, Martin Scorsese and more – all play their part in MOJO’s salute to the happiest, unlikeliest comeback in rock ‘n’ roll history.

From bluegrass pioneers to blues kings, from jumping jive queens to jazz giants, from folk heroes to gospel grandees – many of the artists on this fantastic compilation have been personally name-checked in Dylan’s astonishing autobiography, Chronicles, as having shaped and influenced the master himself.

All in this month’s MOJO Magazine – OUT NOW!