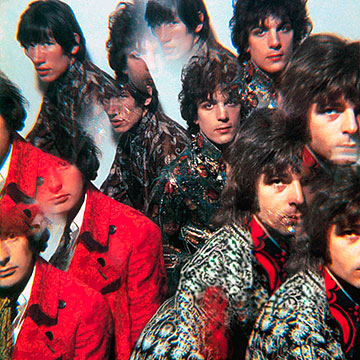 Prism lens given to Vic by George Harrison. Click to enlarge.

I knew that a straight shot of the band would not work as the music was so original and far out. It needed a surreal-psyche type image. Special effects in 1967 were hard to come by especially on a low budget as the labs charged a fortune, digital technology did not exist. I had a prism lens that George Harrison had given me a few weeks earlier which I had never used. Stuck over the camera lens It multiplied and fused the image together, creating a psyche effect straight on the colour film, so I decided to use it. The photo session was booked for a one day shoot in the studio soon after and I asked the band to bring a selection of groovy clothes fashionable at that time.

On the day of the shoot the band arrived in the morning, we sat around in the studio chatting over cups of coffee and sorting though the selection of clothes with The Piper sounds blasting out. After a couple of hours or so we started the photography. The band saw the prism lens but could not work out how they would photograph through it. I set up a white background with strobe lighting and a Hasselblad camera.

We started off by taking a few test shots on Polaroids and the band members started getting into the session especially Syd who showed a keen interest in photography. We then had a lunch break with the music blasting across the studio.

After lunch the session took off Syd and the band members started fussing with the clothes and we played around positioning the band on the white background so that the prism lens would capture the best angles of the band. Finally I loaded the camera up with Ektachrome colour film and shot the cover photo.

All in all we all had a nice positive day creating some great images and chatting about the music scene. Love and Peace was the message and we all went home happy. A few days later The Pink Floyd received the photos shortly after I heard that the band loved the images and Syd designed the back of the album cover. That’s the story of of the Piper photo shoot.

I was sorry to hear of Syd’s passing away recently, although artists always stay alive through their art and never die.

Vic has some high quality Giclee prints available on his website which are hand signed and available in A2 and A3. More info.