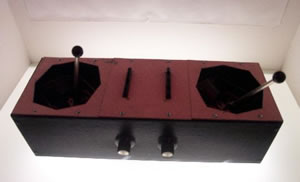 Pink Floyd’s second “Azimuth Co-Ordinator” is to go on display in a new exhibition at the Victoria and Albert (V&A) Museum in London, England.

The Azimuth Co-Ordinator was a contraption built by Abbey Road Studios boffins which, when its levers are manipulated, causes the sounds the band is making to revolve around the theatre.  Quadrophonic sound!  The original Azimuth was stolen but they had another built for their 1969 Royal Festival Hall concert. It was operated by the late Richard Wright, Pink Floyd’s former keyboard player, during concerts.

The exhibition, entitled “Theatre Collections” is due to open on the 18th March 2009.  More info on the V&A website.

According to England’s Independent newspaper:

With one week to go before the galleries open to the public, original Sex Pistols T-shirts are still in their protective covers, and Michael Annals’ set model for Long Day’s Journey into Night, at the National Theatre in 1971, is not yet properly lit. Stretched across a mannequin is Mick Jagger’s flared cream jumpsuit with metal poppers, designed by Ossie Clarke for the Rolling Stones’ 1972 European tour. Brian Eno’s flamboyant black silk costume, with feathered sleeves, worn on stage and on the inside cover of Roxy Music’s 1973 album, For Your Pleasure, adorns another.

The galleries are currently reached via a temporary wooden door, and inside technicians are still busy stringing up Victorian marionettes with invisible wire. Visitors are to be greeted by a giant latex rhinoceros, which made a brief appearance in Ionesco’s Rhinoceros at the Royal Court in 2007, and will at some point perish and disintegrate.

Although the V&A acquired the original artwork of the Rolling Stones lips and tongue logo last year, with help from The Art Fund, rock and pop memorabilia is a little thin on the ground. There is, though, one of Pete Townsend’s smashed electric guitars, and an old- fashioned “surround sound” system known as the Azimuth Coordinator, which was used by Pink Floyd in the 1970s. “We’ve been collecting since the 1970s, but gradually rock and pop items just became too expensive. We couldn’t compete with private collectors. Now that people are aware that we collect them, hopefully they will approach us with items,” says Dorney.