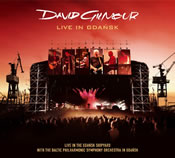 David Gilmour’s eagerly anticipated Live At Gdansk CDs and DVDs are to be released this Monday 22nd September 2008!

It is available in multiple bundles from 2CDs up to 3CDs and 2DVD, and also 5 LPs! Certainly plenty of choice.

It will be released in the rest of continental Europe and the UK (along with Brazil, Israel, Mexico, and New Zealand) on Monday 22nd September; Argentina and North America on Tuesday 23rd; Australia on Saturday 27th; and Japan on Wednesday 8th October 2008.

You can listen to “Wots… Uh The Deal” which is only available on the LPs! Streams from EMI web server so you cant download it!

so do use them!

The last concert on David’s 2006 Summer Tour was held in front of 50,000 people at the shipyards in Gdańsk, Poland, at the request of the Gdańsk Foundation.

The creation of the Solidarity movement, after Lech Walesa’s sacking from the shipyards, led directly to the dismantling of the Soviet Union’s control over the former Eastern Bloc, and to the reunification of Germany.

The concert was the only occasion on which David performed the tour material with an orchestra, using the 40-strong string section of the Polish Baltic Philharmonic Orchestra, conducted by Zbigniew Preisner, who was responsible for the On An Island album’s orchestral arrangements.

Other unique features of the show included the special 6-screen design, created by lightmeister Marc Brickman to allow each band member his own dedicated screen for the edification of the audience; the performance of A Great Day For Freedom with the orchestral arrangement of the late Michael Kamen, and a guest appearance by prominent Polish pianist Leszek Mozdzer, who reprised his piano part from A Pocketful Of Stones.

Live In Gdańsk is available in versions to fit every pocket. The 2-CD audio-only version represents the August 2006 concert from the Gdańsk Shipyard, featuring David and his stellar touring band plus a 40-strong orchestra. The final concert of the On An Island tour in front of 50,000 people, it can be seen as well as heard on the 3-disc version, which includes an extra concert DVD (114 minutes long) and Gdańsk Diary, a 37-minute filmed documentary. All of the show is included on the CDs, except for Wot’s… Uh The Deal?, which does however make an appearance over the concert end-credits on the DVD.

There is also a 4-disc version, packaged, like the 2-disc and the 3-disc, in a carbon-neutral cardboard wallet, with a 12-page booklet including credits and concert photos, plus a 5-disc package, presented in a cardboard box with bonus collectable extras. The 4-disc version is the same as the 3-disc version, but with an additional DVD of live performances from the Mermaid Theatre, the AOL Sessions, and Abbey Road. It also has three brand-new tracks performed as live jams by David with Richard Wright, Steve DiStanislao and Guy Pratt, filmed in David’s barn. In addition, it also has the whole On An Island album in 5.1 surround sound audio, on Dolby Digital or DTS format.

As if that wasn’t enough, the 5-disc version has all of the aforementioned discs, plus an extra audio CD of live tracks recorded on the Summer 2006 tour, and a 24-page booklet, reproduction concert memorabilia and a 2-sided poster.

Finally, for vinyl junkies, the entire concert is available in a box of LPs: 8 sides are the concert, including Wot’s… Uh The Deal?, while the 5th disc holds two Barn Jams, On The Turning Away live from Venice, and two songs from the Live From Abbey Road sessions. You also get a ‘Webpass’, which allows one complete download of the whole five discs in MP3 format to a computer of your choice.

If you are a Pink Floyd fan, you should subscribe to the NPF Newsletter to remain informaed about news and site updates!