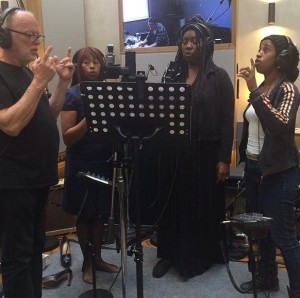 A photograph appeared on the internet showing David Gilmour recording his much rumoured new album in Hove, Brighton.

Backing singer Durga McBroom said of the photo, “GUESS WHAT?? LOL!! This is me, Sarah Brown, Louise Clare Marshall, and this funny dude we found strumming a guitar in Hove. His wife Polly leaked the photo on Instagram. Naughty girl!”

Late on last year, singer Graham Nash also confirmed David is working on a new album. The excitement builds, although nothing officially confirmed as of yet.

David Gilmour last toured a new album in 2006 when he treated people around the world to some impressive renditions of his On An Island album. He even learnt the saxophone, had a guy playing “glasses” and played an amazing concert at Gdansk, for which there is a live DVD for your pleasure.

As well as David’s new album and possibly a tour, Roger is also working on a new album; there is the Wall Live DVD if that ever gets released of Roger Waters’ Wall Tour. Lets not forget the official exhibition in Italy later on this year called Their Mortal Remains exhibition which should be amazing for those attending.

Pink Floyd fans have never had it so good.