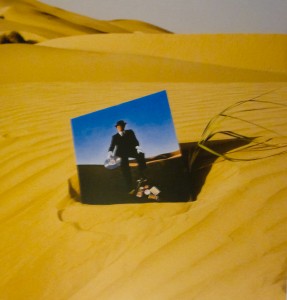 The long-awaited 5.1 version of ‘Wish You Were Here’, mixed by James Guthrie, will be released on 7th November 2011 via independent label Acoustic Sounds. So, all of you that bought an SACD player to listen to Dark Side of the Moon when that was released on SACD will have another disc to add to your collection!

The SACD is, of course, being released as part of the huge release schedule which comes under the title “Why Pink Floyd…” which starts from 26th September 2011.

The release had originally been scheduled for around February 2008 but this never happened!

The man who designed the original artwork and the new artwork you see to the right (apologies for poor quality, I photographed it out of Mind Over Matter book by Storm Thorgerson) had these words to say about the project, “Like Dark Side of the Moon SACD it seemed appropriate to re-present the imagery in a different fashion, same thing but seen differently, just like the music, which would be the same thing but heard differently due to the remix (a remix tailored to the six speakers involved, which of course you have to go out and buy, being as you are living in a consumer society).

One of the features of the original WYWH cover is the involvement of the four elements of antiquity, Earth, Air, Fire and Water or, in our case, sand, wind, fire and water. Thus we decided the subject of the original artwork, or print therof, to the element in question, such that the burning man is now a print buried in a desert, the diving man is a print viewed underwater and the veil is a cloth picture blowing in the wind.”

I shall post more news about the SACD as it becomes available.

Links – Discuss Wish You Were Here 5.1 SACD on the Forum | Why Pink Floyd Press Release May 2011