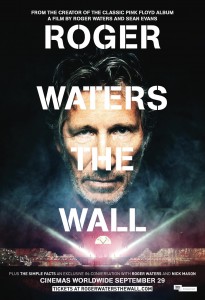 Roger Waters The Wall Film 2015 will be shown in cinemas across the world on 29th September 2015. A poster for the event has been released to the right (click to enlarge).

Picturehouse Entertainment and Fathom Events announced they have acquired international and U.S. rights respectively to Roger Waters The Wall 2015 written and directed by Roger Waters and Sean Evans.

The film, with an exclusive “in conversation” with Roger Waters, will have an unprecedented event cinema release across the world at 7.30 pm local time on Tuesday September 29 this year. More information and tickets will be available this summer at www.rogerwatersthewall.com.

You can watch a clip from the movie below – select the video quality and put on 4K! This should look rather good in a cinema.