Sound & Vision Interview with Nick Mason for Why Pink Floyd 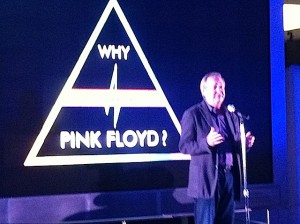 Sound & Vision’s Mike Mettler interviewed Nick Mason at Hayden Planetarium in NYC at the Capitol Records launch of Why Pink Floyd. The November issue of the audiophile magazine will feature the fruits of his labour!

Here is an excerpt…

“This is one case where the record company got it right.”

So assessed Pink Floyd drummer Nick Mason last night at an exclusive launch party at the Rose Center for Earth and Space at the American Museum of Natural History in New York. Mason was addressing the crowd about EMI’s massive Why Pink Floyd? campaign before our select group was ushered up into the Hayden Planetarium to experience the “interplanetary playback” of a previously unreleased performance of The Dark Side of the Moon in its entirety at Empire Pool at Wembley in London on November 16, 1974. The initial installments of the Why? campaign — Discovery editions of 14 remastered albums (and a collected Discovery box set), plus The Dark Side of the Moon Experience Edition, Immersion box set, and 180-gram vinyl — are in stores today. And Mason is totally correct in his assessment: They’re extremely well done, and absolutely worth your attention.