The Pros And Cons Basic Analysis By David Smith 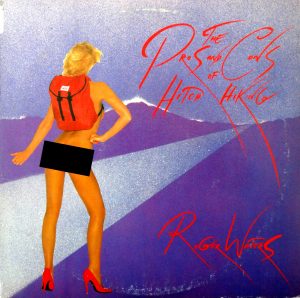 More complex than the wall and deeper than Dark Side, just a shame about the music. The Pros and Cons of Hitchhiking was the first solo album by Roger Waters and the subject of this fairly light song by song analysis to help those that struggle with the album to follow it and to be able to develop their own ideas from these ones.

So we start with the narrator drifting off to sleep as the lines between reality and dream are blurred. His wife tries to engage her in conversation but he appears to respond to her seeing a fantasy woman instead of her introducing us to the theme of infidelity and the first song:

The narrator and his wife (assuming she is that) here in the car, keep note of this, she IS present during this sequence

The attractive hitchhiker’s relationship at this stage reflects his. She is with a partner (‘she’s much too good for him’) but it is a gender role reversal from the narrator and his spouse. This album is about sexual politics and in the relationship she is the more independent one and is ok with being eyed up and stuff knowing that her partner will not question this as the narrator is comfortable doing the flirting as his shant either. Their partners need them more than they need their partners.

The narrator cries a tad. A first sign of weakness. He may be the stronger one in his relationship but can he really leave his wife for her? Perhaps he starts to realise not. Either that or he has the realisation this is a dream. Up to you really.

We can presume she is about to say something painful because the next song immediately begins on a rush as he goes through a list of impressive things that he has procession of, as if to assure her that he is good reveals his commercial goods rather than his true personality, this is the first mention of his inability to connect with people on a personal level.

The music returns to the familiar and calm music. He has convinced both her and himself of his qualities with his commercial possessions in order to deny any doubt he may have of himself (or that she may have.) He is self confident again after this very short moment of despair and fear. The dream suddenly changes location to the bedroom and for the first time it is implied that he is actually the dependent one in the relationship as the female who is possibly his wife has Arabs with knives ready to punish him for his thoughts of infidelities

She said “Come on now kid, it was wrong what you did
You’ve got to admit it was wrong”
Oh god….Jesus
Sleep Sleep
I know that I’m only dreaming

She informs him his eyeing up and temptations were wrong, she says this in a very reasonable voice though to assure him she is actually very sincere in her motivations of this act of punishing him. However, just as he feels in danger he manages to remind himself it’s just a dream and imagines himself away to Germany for the fairground, a place that to him represents safety and contentness :

Now that he feels safe in his dream world he thinks back to the hitchhiker with the rucksack, how he wishes he was still with her, but after his wife’s actions he is slightly unsure if he can make it there in the dream. He watches as his partner seems to flirt with a waiter and he immediately becomes worried that she is now going to commit an act of infidelity as he watches making her the more dominant one by punishing him. This continues in to the next track as he tries to rid himself of this fear of her committing infidelity by having sex with her, however at the end this is far from the reality

He is unable to conquer his fear of her leaving him and begs her to stay with him, but his dream turns in to a nightmare as he is unable to stop thinking about the possibilities of her leaving him ‘Forget it’ he says denying the reality, and the next track begins. Sexual revolution is a violent song with all his aggression being transferred in to sexual energy. This brews from spite towards the possibility of his partner leaving him for someone else and again he tries to regain confidence in his position as a lover by bringing back the hiker and having sexual intercourse with her.

I am only a rat in a maze like you

He justifies it by assuring the hitchhiking girl that he is just lost, as is she. They are both lost in their relationships and can find their release in each other. However, for these further thoughts of infidelity he returns to his room again where his partner is aware of what is going through his mind and shows no mercy. To punish him again for his unfaithful nature (this time physically cheating on her) she eats a little dog that he rather likes. To him this dog is an emblem of his youth and innocence (hence it being from a kid’s song) so she putting a symbolic end to this reminding him that there are consequences to infidelity.

And just as it all seems really bad with her brushing away the remains of their love her voice turns from the harsh screech of Roger Waters to the sincere and vulnerable voice she earlier had in Arabs… and in reality, as displayed in the beginning of the album. She dictates that they leave and he agrees, following her lead before he regains control choosing the location and the route they take making everything is now ok again.

Plenty more fish in the sea. Basically everything is going very well for them as the settle down in their new home, but we can presume with the notion of him going fishing that he is keeping an open mind about women and that perhaps it is further infidelities that are the motivations for what follows. The new life begins to rot and the kids get ill and his family falls apart as his partner now goes the full way and leaves him because he cannot commit to just her out of fear of feeling vulnerable and being honest with her. This is confirmed in Dunromin duncarin dunlivin as his mistake

You were my everyday excuse
For playing deaf, dumb and blind

He always took her for granted and as a result remained ignorant to the world around him as if it all came unconditional. ‘Playing’ confirms this is an act and he is really unable to open reveal the person inside. He is uncomfortable with life because for him it is a constant falsity

She waits for the real Mr. Right to come
Gently removing her heart
With his promises of real communication

In his depression he imagines his partner to now be with someone else who can fully commit to her and be open and honest with her… All the things he cannot do. Unable to accept this he denies her new man and is unable to see why he in any better than himself. He realises the new man promises real communication seems to treat her in just the same way that he did, a fact that makes him sick at the end of the song with the realisation that he was doing everything right with her except being honest. The above quote is him trying to justify himself to her as being the stronger lover

At a low the narrator tries to pick himself up again by recreating the feelings of excitement he had earlier with that hitchhiking girl by channelling further ill feeling to in further sexual energy for some more casual sex. Hitchhiking is a metaphor for being single and looking for a partner, and this album of course looks at the pros and cons of not being able to fully commit to another individual. A biker comes along to greet him. Rolling stone is of course a phrase for one who sleeps around a lot and he now tries to think of himself as one… Far from the truth really

He watches the biker in action and sees him immediately finding a new partner; however, this is only for a one night stand and nothing more. A bit of successful hitchhiking, but is it satisfying? Unable to do this he worries about his own life and questions it’s worth:

He is too scared to die and also convinces himself that he has a lot of live for, but has to do so without thinking of his partner who he still holds a candle for. Again he doesn’t want to look vulnerable so she goes unmentioned and vanity is used to defy her role in his life and her importance to him. Unfortunately for him he is reminded of masculine ideals like Shane and Dick Tracey, that he can not live up to. He can only at best be himself. This discourages him and he returns to the kerb out of fear of the possible results of sleeping around, he just wants to be with someone who accepts him again, though still denies his partner as being right for him

He retreats away from the road and in to a calm coffee shop. Along comes a waitress that reminds him off his partner and her kindness. From this he further reflects on her and how even without her there she is all around him in spirit (in every stranger’s eyes actually) and this creates a much better world for him to be in.

He regains faith in himself as a partner and a person upon the realisation that to be strong at both roles he just needs to be able to offer honesty and genuine communication without this constant fear of vulnerability. This leads to a moment of clarity as he realises what he has lost and why. The moment of clarity comes and he realises that he is a mere mortal, yet so is his partner and so genuine communication is all that is needed to save the relationship. While the dream may be other and was a wee bitty exaggerated in places the message was a true one that he shall now apply to life

And I have to admit
I was just a little afraid, oh yeah
But then…
I had a little bit of luck
You were awake
I couldn’t take another moment alone.

And now in reality he admits to this fear that his wife will be gone, acknowledging as a result of his dreams his vulnerability and love for her. He feels content with her once again.