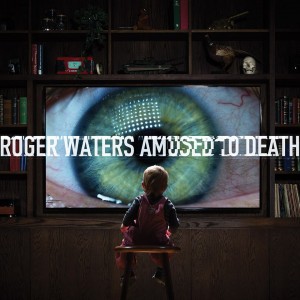 Roger Waters’ solo album Amused to Death has been remixed and remastered and will is released tomorrow much to the delight of many fans.

You can pick up a copy from Amazon.com or Amazon.co.uk and have it shipped to you in no time – it is released 24th July 2015 and is one of many great things happening this year.

In The Big Pink Floyd Survey, visitors to this website voted Amused To Death from 1992 as the best solo album amongst all the solo albums released by members of Pink Floyd past and present.

It is an excellent album and is one of your humble narrator’s favourites. If you haven’t got it yet (have you got it yet?) then I suggest you get on board with one of these re-releases!

The artwork has been re-designed, the mix has been redone so there are changes to what you hear in the songs as things which has previously been omitted have now been included – should be interesting to listen to even if you already own the album.

Here is a great video of Roger talking about how the album is still relevant today and that people love the vinyl!

There are lots of formats available for audiophiles everywhere including an excellent vinyl if that is your thing. The digital versions especially the blu-ray should be of interest to people with that kind of setup. Enjoy.