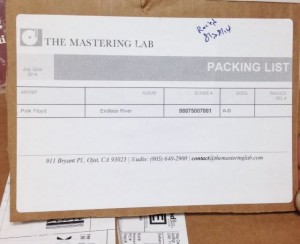 Acoustic Sounds has shared some photos of Pink Floyd’s new studio album The Endless River they are working on for release in October 2014.

Acoustic Sounds were chosen to handle the release of the double vinyl of the album and have received the master copies as you can see below from The Mastering Lab. 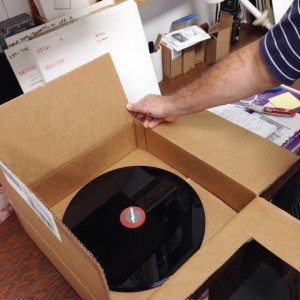 There are of course four sides to a double vinyl recording and all four of these were sent to Acoustic Sounds at Quality Record Pressings, straight from Doug Sax and crew at The Mastering Lab northwest of Los Angeles.

The follow-up to 1994’s ‘The Division Bell,’ ‘The Endless River’ marks the 15th studio album by the famed British band. Scheduled to release in October, ‘The Endless River’ finds David Gilmour and Nick Mason completing work on sessions with the late keyboardist and founding member Rick Wright. This is the third album by the Gilmour-helmed Pink Floyd after Roger Waters’ departure from the band in 1985. 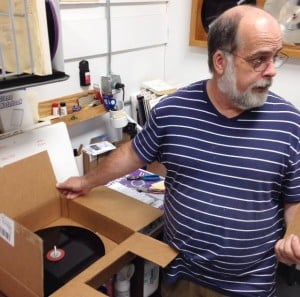 Pink Floyd The Endless River Vinyl Master getting ready to go into production.

The album is based on unreleased material the band produced with Wright during sessions for ‘The Division Bell’ in 1994. Ultimate Classic Rock has done a nifty ’10 Facts You Need to Know’ roundup concerning some pertinent nuggets about the new album – for instance, what started as a collection of all-instrumentals now has lyrics, and some Gilmour lead vocals.

Acoustic Sounds said, “We’re ecstatic that QRP was chosen to press ‘The Endless River’ on vinyl and proud that our recent pressing of ‘The Division Bell’ was so highly received. When we say we press the world’s finest-sounding LPs, we mean it.”