David Gilmour’s New Album Has A Famous Guest On Piano… 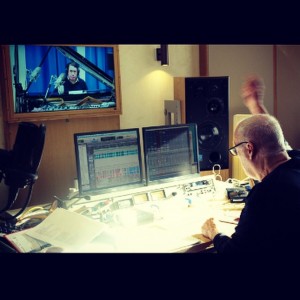 Jools Holland can be seen in the photo to the right with David Gilmour recording the new album in a studio. Click photo to enlarge.

Polly said on her post “A good day at work today.” She later elaborated saying “it really was fantastic today – Jools’ playing so perfect for the song, D fired up and much joy. X”

David Gilmour’s last studio album On an Island was given an extensive tour around the world much to the enjoyment of fans the world over.  The recent release of Pink Floyd’s The Endless River studio album has likely got fans excited again for seeing David Gilmour (Roger Waters too separately) touring again.

David has said in interviews recently that the tour accompanying the album he is recording will be lower key and will call at venues like Radio Music Hall in USA. David said, “There haven’t been many discussions about the tour. But places like Radio City Music Hall sound like the right sort of vibe for me.”

If he wants to keep it low key, he is welcome to come play in my back garden and have a beer too!